If you read my blog post yesterday, you know I am currently at Glacier National Park to photograph the wonderful beauty that God bestowed upon us in this pristine area of northwest Montana. I had planned this trip since last summer, but things got off to a rocky start when an unexpected snowstorm hit in late June, at about the time the park was expecting to have the ~50 miles of main park road (the “Going-to-the-Sun” road) cleared of the massive winter snow accumulations. Cleaning this highway is not an easy task. And not safe! In addition to the plow and snow removal crews, they have “spotters” that constantly watch for potential avalanches while they clear the roads. Two days before I left home, it was still a bit doubtful if the roads would be clear when I arrived. But the day before my planned departure, the park issued a press release that they expected to have the road open by the weekend. With a little reluctance, I decided to hit the road and hope for the best!

My first morning in Glacier was an exploratory trip … find the hot spots, see what was happening around the park, talk to park employees to find out where wildflowers were blooming and where wildlife had been recently spotted. And finding out which trails should be on my priority list. After getting those questions answered, and a handful of maps, I started down the Going-to-the-Sun road. On this first day, I stayed at the low altitudes, checking out multiple locations (with the Fourth of July crowds in the area, I decided to wait until the following morning to travel to the Continental Divide, aka Logan Pass, for the wildlife).

On my exploratory mission, I checked out a lot of pullouts that featured the 17-mile long McDonald Lake and the McDonald Creek that flows from the lake. At many of the places, one of things that captured my attention were the many, colorful rocks of the lake and creek: 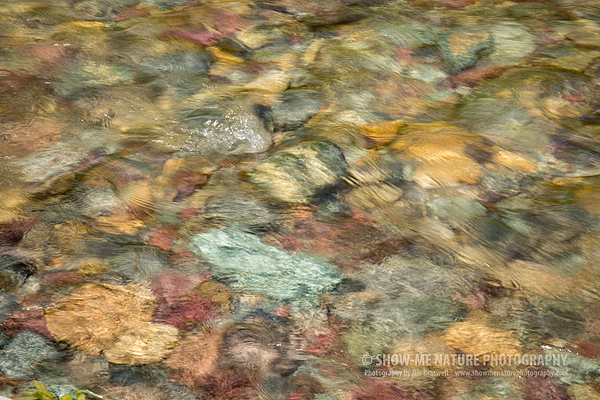 The above photo was taken handheld, at a very slow shutter speed (see shooting conditions, below). This is how I like to shoot moving water, giving it an ethereal look. Part of my exploration was to travel light, which included not setting up tripods. But I’ll make at least one more visit to one of these areas and shoot the colorful rocks, using a tripod, before I leave. And will use a polarizing filter to help bring out the colors of the rocks.  :o)