As previously noted, I was very pleasantly surprised to find a single Whooping Crane (Grus americanus) along the Platte River. The Whooping Crane is a very rare and endangered bird, numbering less than 300. Through extensive conservation efforts, their numbers are rebounding (although very slowly) from their all-time low of less than 50 birds back in the 1970’s. But no one knows the exact numbers today. Complicating things, the extreme drought of 2011-2012 in south Texas (the wintering home for most of the Whooping Cranes) has impacted their comeback. Reports I’ve seen show that several whoopers did not survive the winter there, mainly due to low water levels and accompanying reduction in food.

As the Whooping Cranes migrate back to their breeding/nesting regions (the Arctic north and even some in Siberia), they normally make a quick, overnight stop on the Platte River, but basically continue migrating until they reach the tundra area. The lone Whooping Crane featured in my posts is a bit of an exception. I was told that this crane is approximately 4 years old and has been “raised” by a group of Sandhill Cranes. No one knows what happened to the Whooper’s parents or why this group of Sandhill Cranes has been raising this youngster. Nor do we know if/when this guy will meet up and start hanging out with other Whoopers. Being with the Sandhills, who normally stay in the Platte River area for 3-4 weeks (putting on up to 25% body fat for energy to make their final leg to their nesting areas), this Whooper also sticks around with his “parents” for an extended time.

Here are a few images captured of this Whooping Crane. As we waited one evening in the blind for the cranes to return to the Platte River to roost, I captured this image of the Whooping Crane returning to the river: 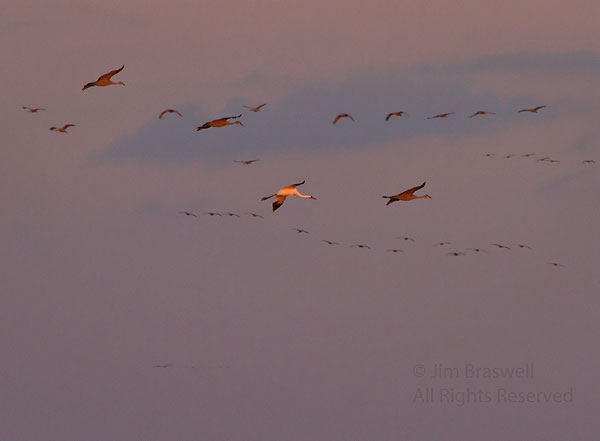 After he landed, I was able to capture this image of the Whooper, in his roosting spot for the night: 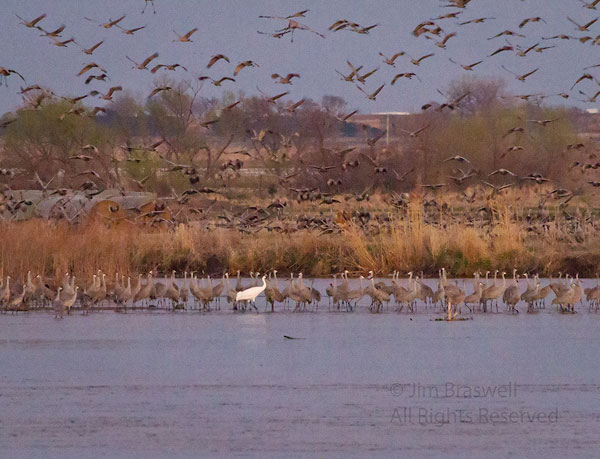 The next morning, from the same blind, I managed to capture the Whooper as he left the river, heading for nearby fields to forage for food: 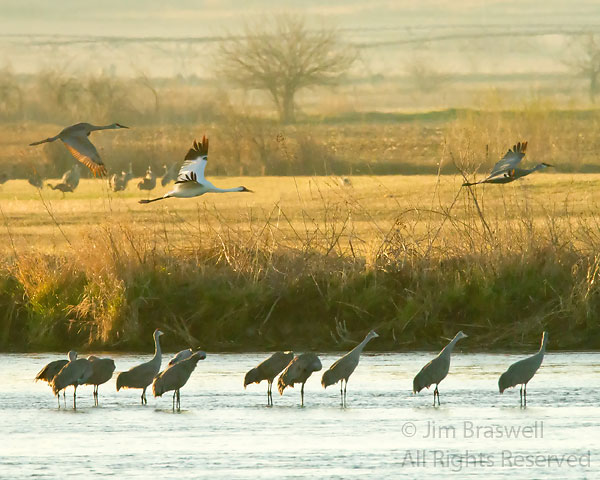 The Whooping Crane is very similar in appearance to the Sandhill Crane. The main differences are color (white instead of the grayish color of the Sandhills), and being a bit larger in stature than the Sandhills. Quite an impressive bird and such a thrill to see such an endangered and rare bird for the first time!

If you missed my earlier post about the Whooping Crane, here is a link: