Yesterday morning, I spent several hours in my nearby prairie meadow. I had been avoiding this area for the past couple of weeks as deer season (archery) opened up on September 15 and this area is open for hunting. Besides, I know this area is hunted in season as there is a deer stand at the edge of the woods that surrounds the meadow. So yesterday, I decided that I’d see if deer hunters were still at this location; it has been my experience that after the first week or two of hunting, the deer are fully aware of the hunters and and are so much more skittish … and likewise, the hunters are frustrated by then, so the area would likely be open for me to venture into the meadow. Bingo, no hunters (no cars or trucks, at least, in the parking lot)! So I donned my fluorescent pink hat (yeh, just call me “Flash”) just in case a hunter happened to be around. I also made sure to make plenty of noise … human noises, like coughing and singing … boy, that will certainly scare the deer away! … so I wouldn’t be mistaken for a deer, and off I went. I had thought about wearing my waterproof pants, but decided that there wouldn’t be that much dew to contend with … boy was I wrong! Before I traveled 100 feet, my pants were totally drenched! No problem, just an inconvenience … besides, my wife always tells me I’m not like sugar, I won’t melt :o)

I was surprised to find several new wildflowers now starting to bloom … still have to ID them, but will post them later. But the first find was the gorgeous Blue Sage wildflower (Salvia azurea), which has been blooming here for several weeks now. I have posted on this beauty before, but the difference now is that there are many more blooms on each plant, making it even more spectacular to see. Here is an image of a plant with several flowers, as well as many buds yet to bloom: 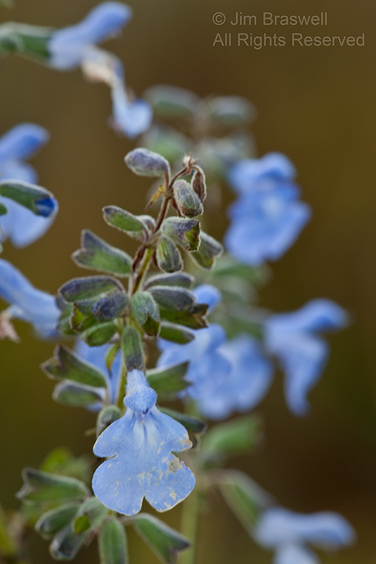 And below is a close-up image of a plant with multiple flowers in bloom. Each flower is approximately the size of a dime, so you can see they are very small, yet dainty flowers: 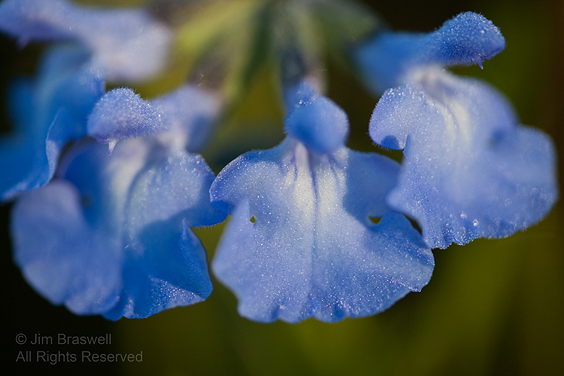 A short time later, I came upon some gorgeous fall color in the meadow. The leaves of the Smooth Sumac (Rhus glabra) were a very brilliant red, with a sprinkling of oranges thrown in for good measure … hopefully, a good preview of things to follow: 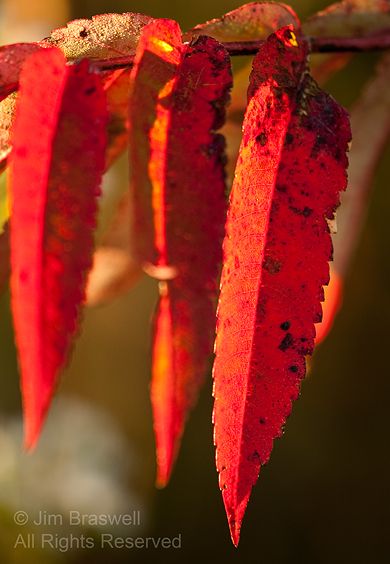 Also, as I was leaving the meadow, I found some Butterfly Flower plants (Gaura biennis) that were shaded by tall sunflowers and some shrubs. Since the sun had not yet hit these small flowers, they were still dew-covered: 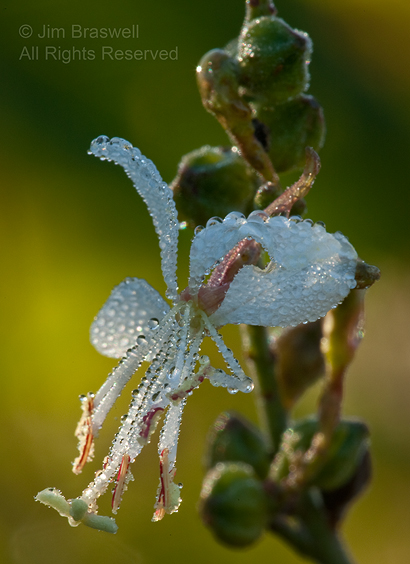 I had a very lovely morning in the meadow yesterday … thinking about going back this morning, right after I post this blog entry!