All Dressed Up and Not a Hair … Urr, Feather … Out of Place

I spent 2 1/2 days last week photographing at the Squaw Creek NWR, located in northwest Missouri. The main attraction there were migrating Bald Eagles (Haliaeetus leucocephalus), Trumpeter Swans (Cygnus buccinator), and Snow Geese (Chen caerulescens). Shortly after we arrived at the refuge, we took a quick tour, via the refuge’s 10-mile auto tour route, to see what we could see and where things were located. Then, we began our second trip around the refuge, this time driving more slowly and stopping at spots where wildlife was either abundant or active.

This refuge is known for the migrating bald eagles and has an annual “Eagle Days” program on the first weekend of December. Besides an inside program with videos and live bald eagles, refuge personnel and state conservation agents are everywhere, assisting visitors in spotting bald eagles on the refuge. Since the refuge gets overwhelmed with visitors during the weekend, we had decided to go up early and do some photography before the crowds arrived. As we drove around, we came upon a Bald Eagle that was busy preening, seemingly preparing for the upcoming visitors.

In this first image the bald eagle seems to be searching out a bad feather: 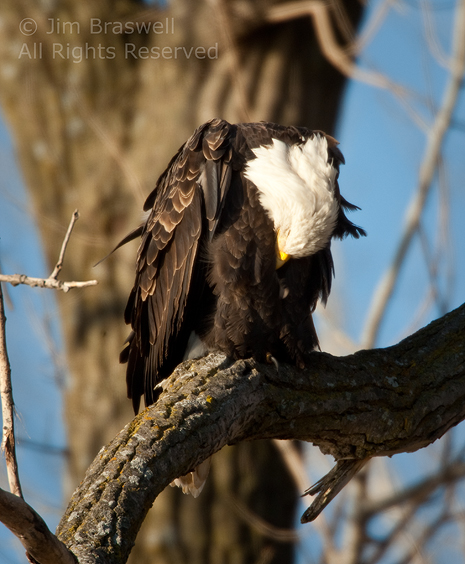 In this next image, the bad one is found and pulled free: 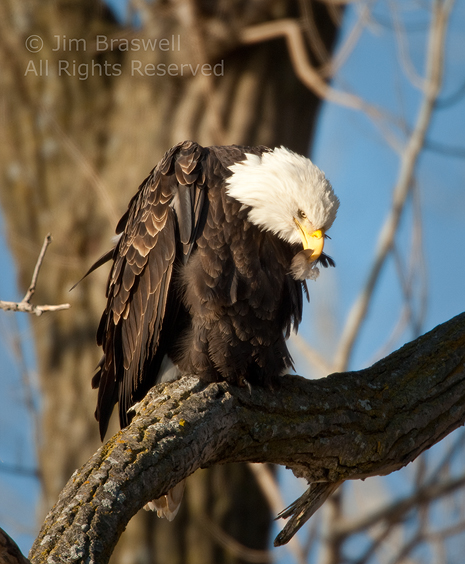 In this final image, the eagle lets the feather fall and slowly floats to the ground: 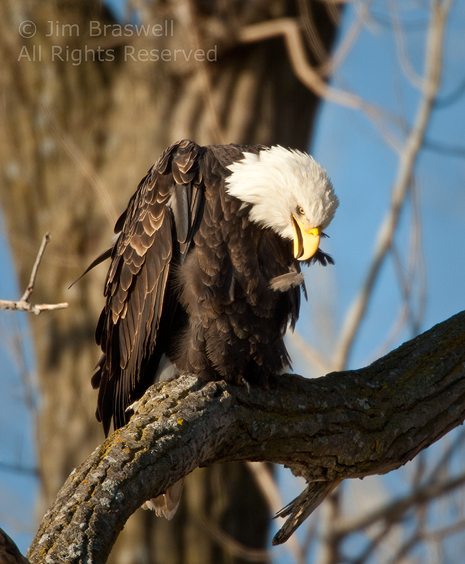 I might add that during our trip to the refuge, another Arctic “clipper” came through the area. This brought in even more birds to the refuge. On Thursday, refuge personnel conducted an updated bird count for the weekend eagle program. The updated counts yielded 121 Bald Eagles, 119 Trumpeter Swans (a new refuge record!) and 390,000 Snow Geese. Don’t ya just love it when everything works in your advantage!

Stay tuned, much more to come from this wonderful trip ….