Over the weekend, I had a chat with one of my local Master Gardener friends about close encounters with wild animals. I mentioned my close encounters with some Mountain Goats a couple of years ago. He was interested in seeing some of the images captured, so I’m re-posting that post today. Below is my original posting and the images we captured that wonderful day along the slopes of Mt. Evans (Colorado):

After my Colorado mountain wildflower photo shoot, I spent a few days camped at the foot of Mount Evans, one of my favorite locations to photograph in Colorado! One of my favorite subjects to photograph here is the Mountain Goat. And summertime is double the fun because all the young kids that were born in early June are very active and so fun to be around!

While there, my good friend Adam Jack (@wildobs on Twitter) came out and camped for a few days with me. He brought along his 11-year old daughter and we had a blast over several days of shooting! One of our best encounters was with a group of mountain goats, with several kids in the group. As we were descending down the road from the Mount Evans Summit, we saw a group of 15 or so mountain goats that were slowly making their way up to the top of Mount Evans. Having been around the mountain goats here several times, I was pretty familiar with their behavior and their likely route to the top. Picking out a spot with some nice, flat rocks (to sit on), Adam’s daughter and I sat down to wait for the goats to come to us. Meanwhile, Adam, somewhat reluctant to leave his daughter’s side, moved about 25 yards away, so he could capture the close encounter we were anticipating would materialize between his daughter and me, and the goats.

Within about 10 minutes, the goats were approaching … directly towards us! 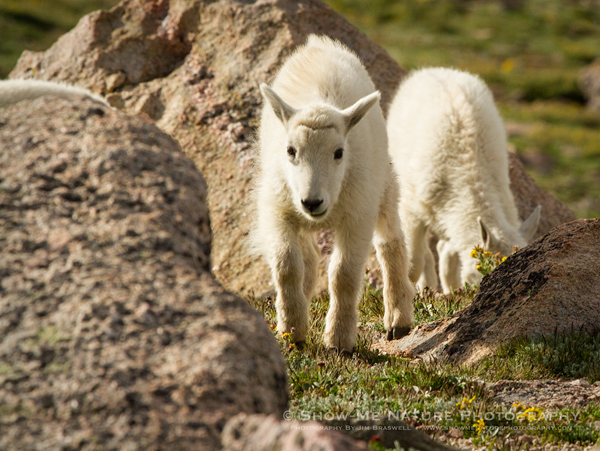 Leading the way, a couple of the kids decided they wanted to check out the “strange rocks” in front of them, that happened to move around a bit. As the two kids approached, the first one climbed atop a large boulder that was only a few feet away! As the first one stared at us and checked us out, the second kid moved beside him and we felt like we were on display! Here are a couple of images, at very close range, that I captured of the kids, as they checked us out: 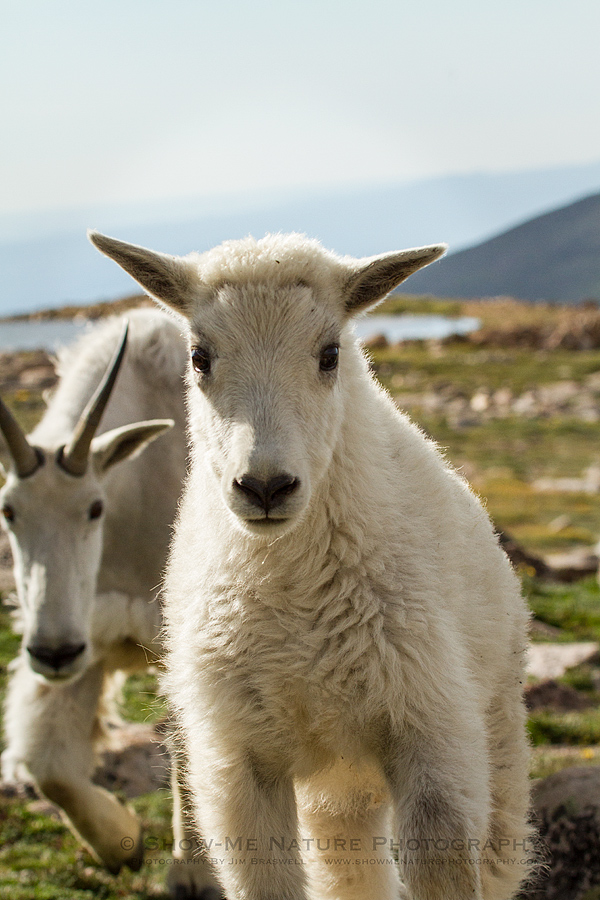 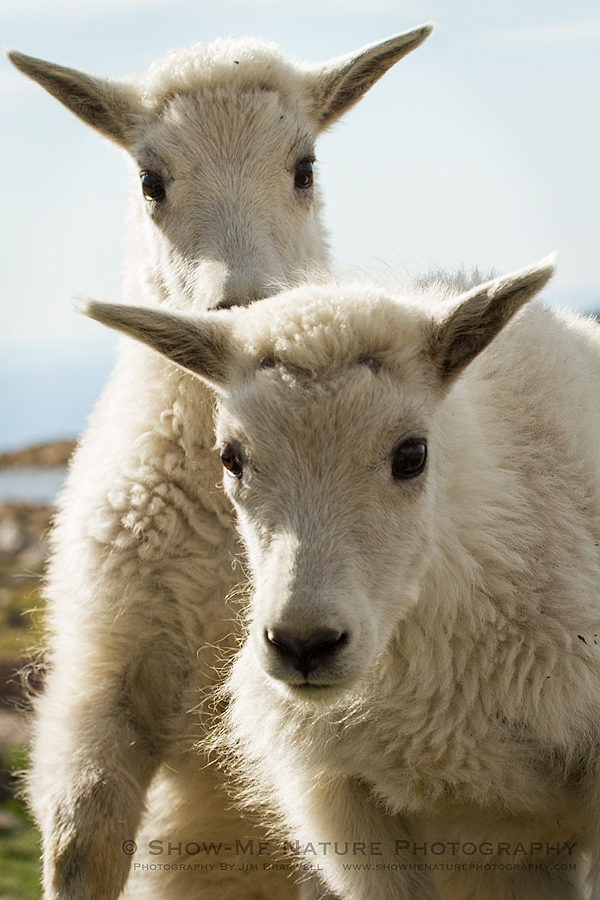 Meanwhile, Adam captured our close encounter from his vantage point: 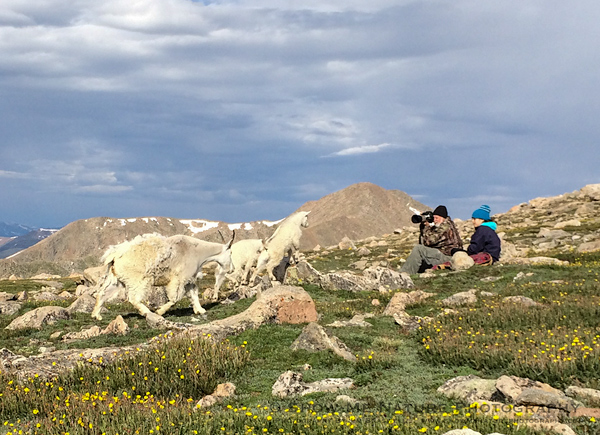 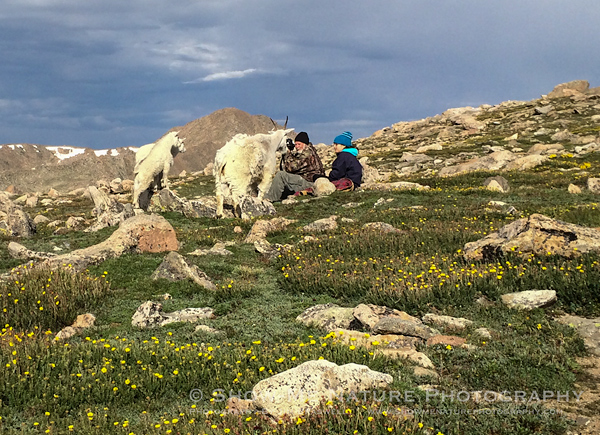 Within a very short time, Momma goat walked straight over to us. I’m sure she was feeling a bit uneasy and just wanted to be sure we were not a threat to the youngsters. As she approached, I whispered to Adam’s daughter to not make any quick movements, or say anything. As momma approached even closer, I began speaking to her in a soft voice, reassuring her we were friends, not foes. She walked right up to Adam’s daughter, and sniffed her arm:

Mama then backed off. I think at this time we were ALL feeling more comfortable! :0) 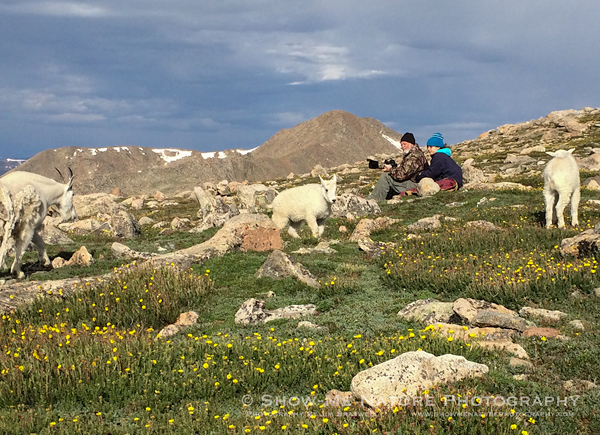 The entire incident was only a few minutes long, but the memories will forever be etched in our minds! Looking back towards Adam, I saw he was in the midst of a little close encounter, himself: 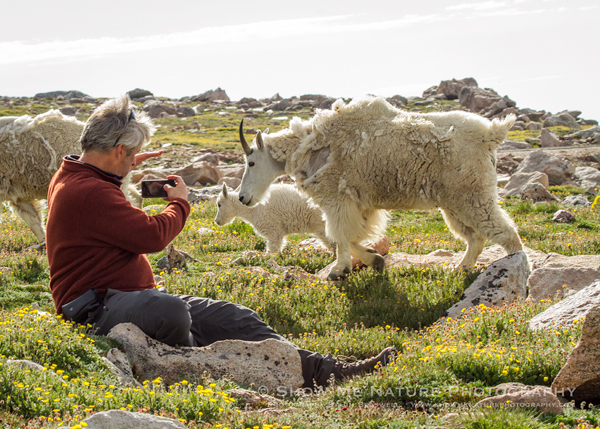 I think it is safe to say we all enjoyed ourselves immensely that morning! It’s so great to have these close encounters with our wild friends. When someone asks me how we manage to get so close, I always have a few pointers. First, know your subjects and their mannerisms and behaviors. Learn to know signs of distress in the animals, and if they are displaying it, then back off! And one very important thing: always get into place and let the animals come to you (if they so desire) … never walk (or worse yet, run) towards the animals. This will surely frighten them. And for those that continuously chase animals around (yes, I usually see a few of these as they are non-stop in their attempts to get close), follow the steps I’ve outlined and you will have much better success!