Well, a quick change of plans this morning. I was going to blog more on the Bighorn Sheep rut, but an unplanned event has prompted a change. Early this morning (must have been ~2:00am), my wife woke me to let me know there was a bat flying around in our bathroom! Thinking she was still asleep and just “seeing things”, I got up to check it out. Sure enough, a Brown Bat was perched on one of the bathroom walls. He then flew across the room and back. I shut the door, leaving the light on (thinking maybe he’d think it was daylight and he should be sleeping!).

When I awoke in the morning, my first thing was to see if he was still there. After looking for a little while, I could not find him. I decided to close the door and re-check the room later. I then headed into my office area to work on today’s blog post. After choosing the images to use and starting to edit them, thoughts of the bat returned to me and I went in to look for him again. This time, I found him sleeping on top of a what-not shelf. Now, the next trick was to find a way to capture him!

My first attempt was to remove the small items from the shelf and try to quietly/softly take the shelf down. But once I started to move the shelf, he awoke and stretched his wings … that was not going to work. And he was too small to try to pick up with gloves. Then I had another idea … use a trash bag to capture him. With that in mind, I grabbed a large trash bag and quickly placed it over the top of the shelf. He immediately flew into the bag. I closed the bag, took it to my covered front porch, and opened the bag. He slowly began to crawl out of the bag, eventually flying off. Here are a few images I captured of this unusual visitor.

In this first image, he is sleeping on top of the shelf (please disregard the dust on the shelf unit … this is near the ceiling, so doesn’t get much cleaning :o) ): 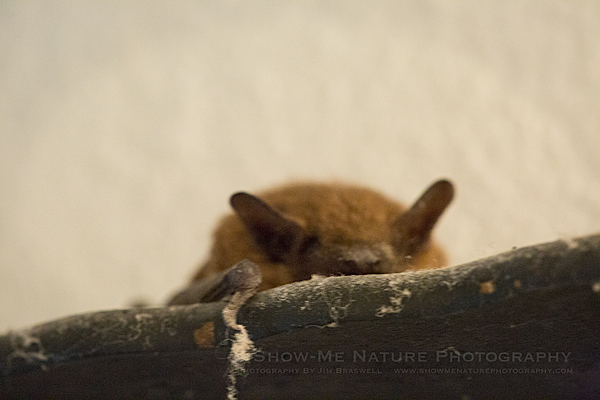 Once outside, he began to fully wake up and crawl out of the trash bag: 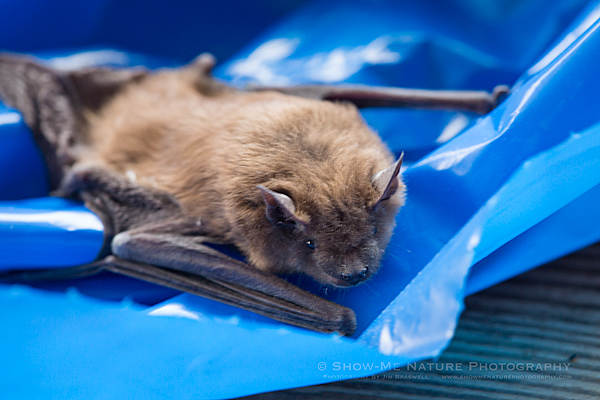 Outside the bag and on my porch deck, just before opening his wings and flying off: 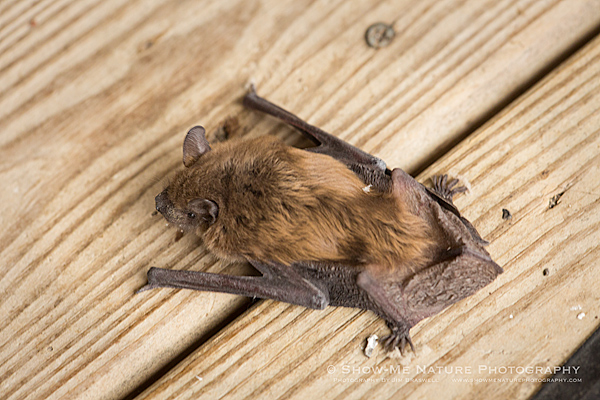 Note: all photos taken hand-held at extremely slow shutter speeds, so the focus is “soft”.

This was quite an experience! My main concern was that maybe he could be rabid … that made things a bit more dicey. The next step? Try to find how he got in (probably from some recent roofing work, but will be investigating).