… Mama sing tenor”. I think that’s how an old Johnny Cash/June Carter-Cash song started out. What does that have to do with this post? Really nothing, except for the deep, bass-like sound of the bull alligator!

While photographing in the Myakka River State Park area one evening, I was photographing from the north side (if I wasn’t turned around!) of the bridge that goes over the Myakka River. I was there by myself and as the gators began entering the water, I continued shooting for a little while. A very short while later, I heard the unmistakable bellow of a bull alligator … unfortunately, on the opposite side of the bridge!

I hurried over to the other side and managed to capture 3 “cycles” of the alligator bellowing. Bellowing is the process where a bull alligator, during breeding season, produces a throaty, bellowing roar that can be heard over considerable distance. As the alligator bellows, the vibrations cause the water around the alligator’s back to literally “dance” on the surface. Here are a few images I captured of the bull gator bellowing: 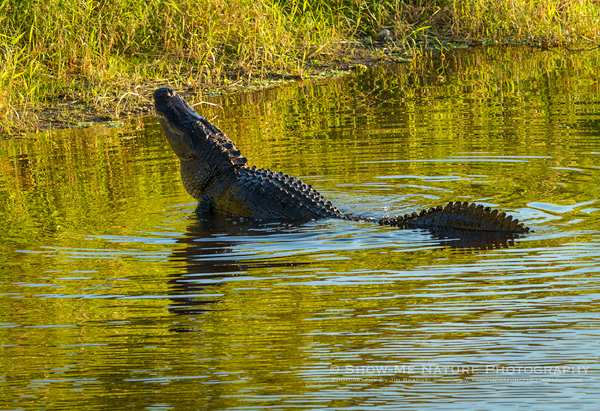 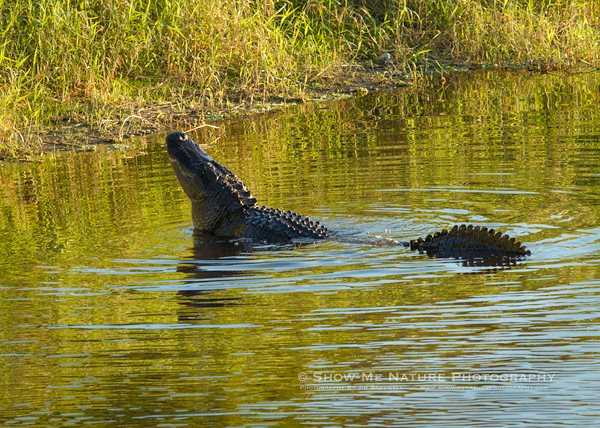 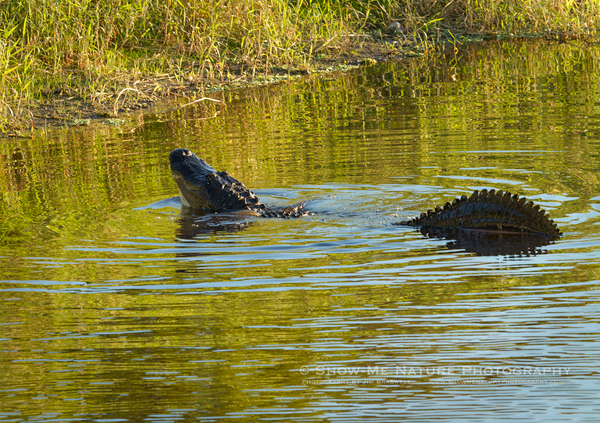 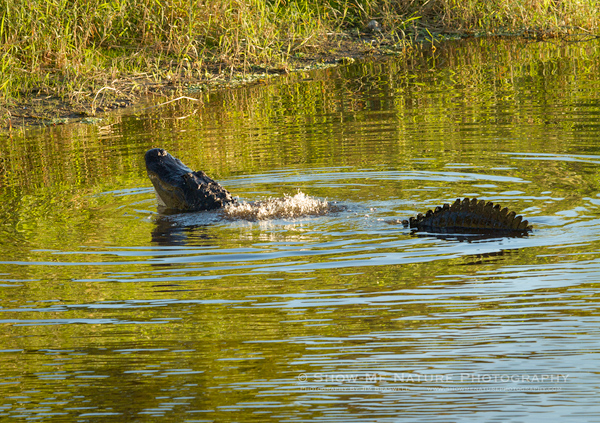 Upon completion of his little behavioral activity, he calmly floated about the Myakka River: 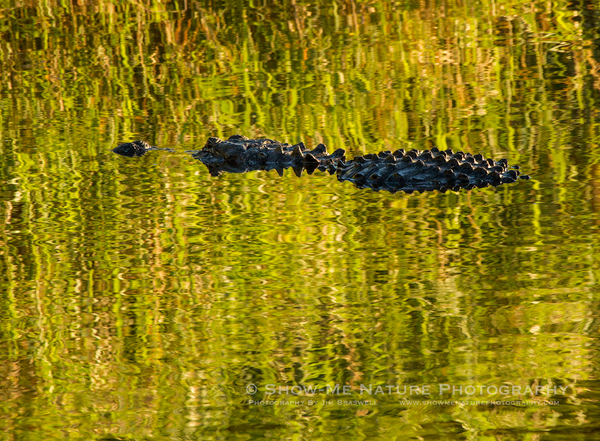 When researching info on the alligator’s bellow, I found this info in Wikipedia:

“Although alligators have no vocal cords, both males and females bellow loudly to attract mates and declare territory by sucking air into their lungs and blowing it out in intermittent, deep-toned roars. The bellowing of the American alligator is distinct from the loud roaring of most crocodilians, and is considered unique. Male alligators are known to use infrasound during mating bellows. Bellowing is performed in a “head oblique, tail arched” posture. Infrasonic waves from a bellowing male alligator can cause the surface of the water directly over and to either side of its back to literally “sprinkle” in what is commonly called the “water dance”. Large bellowing “choruses” of alligators during the breeding season are commonly initiated by females and perpetuated by males. Observers of large bellowing choruses have noted they are often felt more than they are heard due to the intense infrasound emitted by males. Alligators bellow in B flat, and bellowing choruses can be induced by tuba players, sonic booms, and large aircraft. In addition to bellowing, alligators can growl, hiss, or cough to threaten others and declare territory.

Hmmm, “bellowing in B flat” … I’m not a music wizard, but sounds like Daddy Does Sing Bass! :o)

I also was able to photograph one cycle of the gator bellowing. Just a warning … I’m not a professional videographer (that will certainly be apparent when you view the video!), and I was handholding my Canon 7D camera, with EF100mm-400mm telephoto lens, while trying to keep the gator within the constraints of the tiny LCD screen on the back of the camera, so it is quite “jerky”. And from the sounds of the bellow, I think I must have had my hand over the camera’s microphone (no time to run to the car to get my external mic). But the point here is not the quality, but the experience of watching a bull alligator performing this ceremonious act, including the deep bellow sound and the water dancing. Click this link to watch this short video: