On Day 3 of our stay in Ketchikan, Alaska, as soon as we finished viewing/photographing at the Totem Heritage Center, we crossed the small bridge over Ketchikan Creek and walked another 50 yards to the Deer Mountain Tribal Hatchery & Eagle Center. This local Indian community’s hatchery raises and releases more than 300,000 salmon every year. As salmon make their uphill struggle up Ketchikan Creek, the hatchery’s “salmon ladders” will detour some of the salmon to the hatchery. At the hatchery, the females’ eggs are collected and fertilized, in vitro, by the male salmons’ sperm, and the resultant eggs are maintained at the hatchery (the spawned out salmon are released back into the wild). As the eggs hatch, the hatchery maintains multiple concrete pools of salmon fry, segregated by size and species. Later, as the salmon “grow up”, they are released into the wild so they can swim into the ocean. Salmon live their lives in saltwater, until they are ready to spawn (this amount of time varies with the different species of salmon). When ready to spawn, they move from the saltwater into the freshwater of Ketchikan Creek and again move upstream to spawn, fulfilling nature’s life cycle. Here are a couple of images I made of the salmon in the Ketchikan Creek’s salmon ladders (note:  at the bottom of these images, you can see the gate (closed) where the salmon are routed into the hatchery): 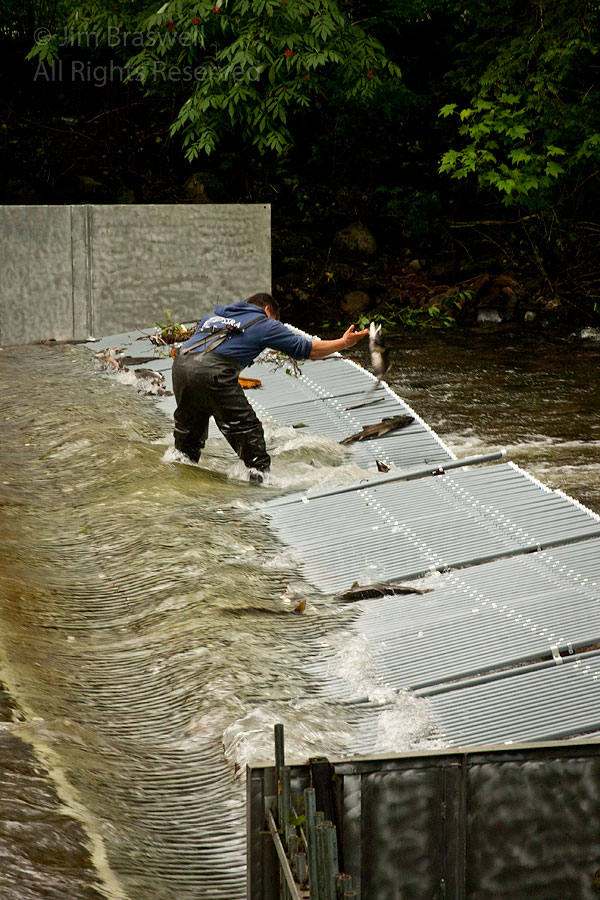 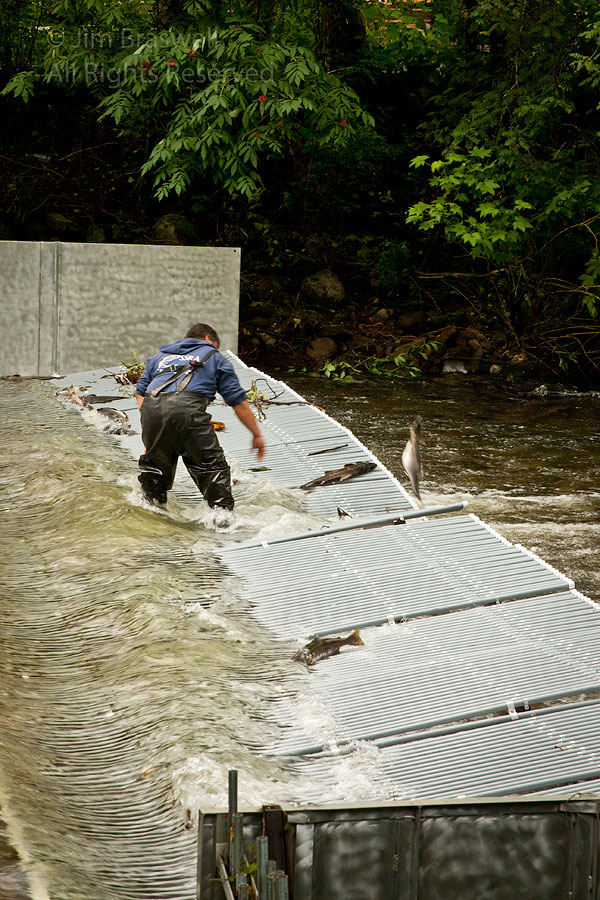 Due to the heavy rains outside and the low light conditions, I did not shoot any images of the fry in the tanks.

If you’ve seen hatcheries before, this one is pretty much the same. But, one big difference is that the tribal hatchery also has a few birds of prey that they keep in captivity, as “goodwill ambassadors” to teach visitors about the birds. By the way, these birds are not able to be released back into the wild, due to physical damage they received while in the wild, before they were brought in for rehabilitation. So, we were able to see/photograph a couple of adult Bald Eagles in close proximity to us: 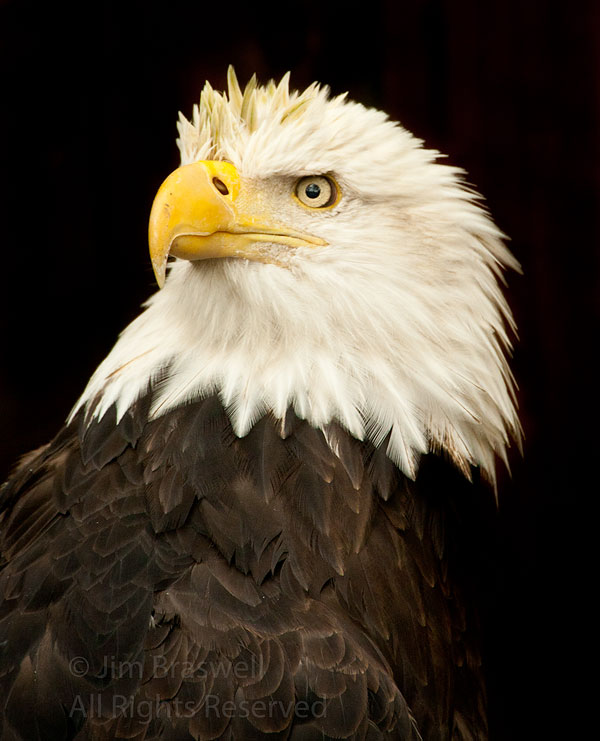 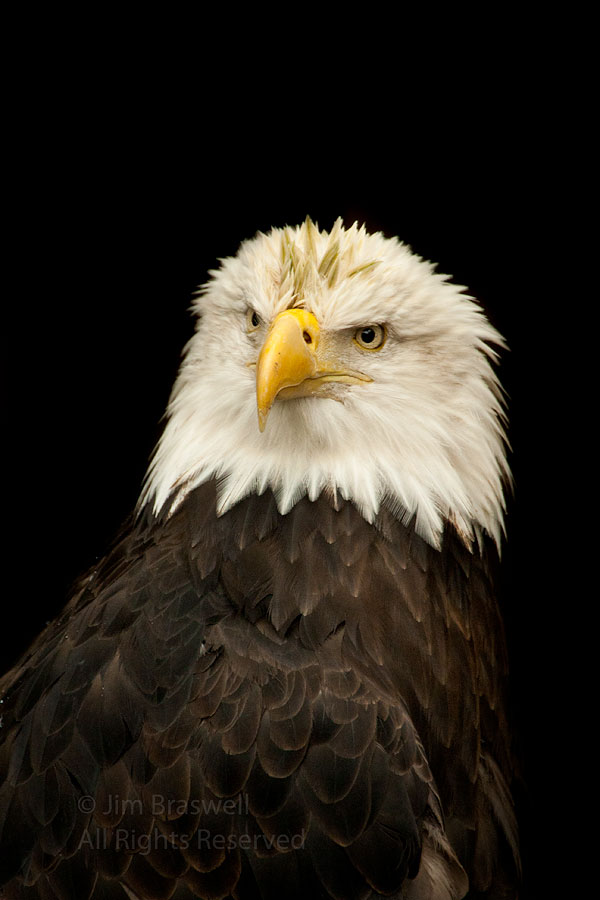 And a closeup shot at a Bald Eagle’s talons: 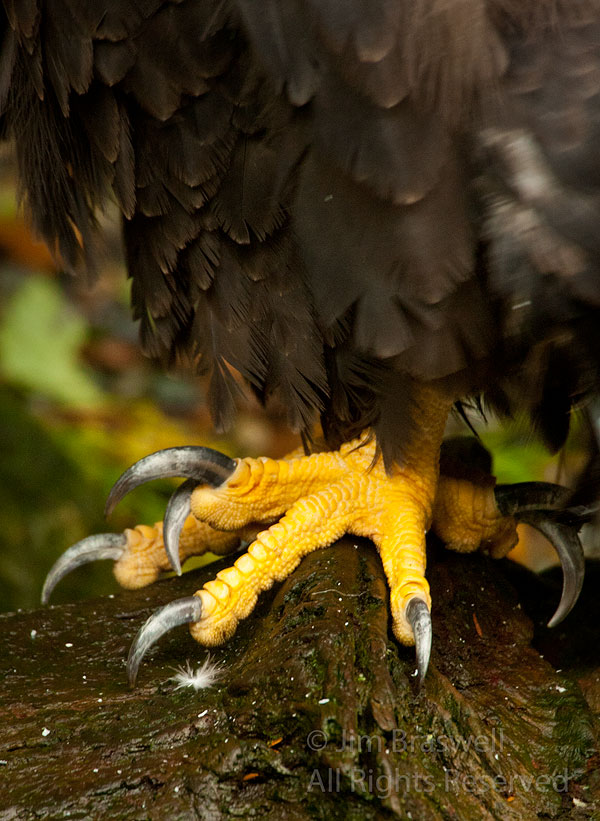 And as a special treat, when we first entered the hatchery, we were asked to join a small, organized group touring the facility, and consequently were able to go indoors and see a special presentation with some “bonus birds” … a Peregrine Falcon and a Great Horned Owl! I was not impressed with the wall colors in the room, but at least I was able to sit close and enjoy the presence of these beauties! First, the Great Horned Owl: 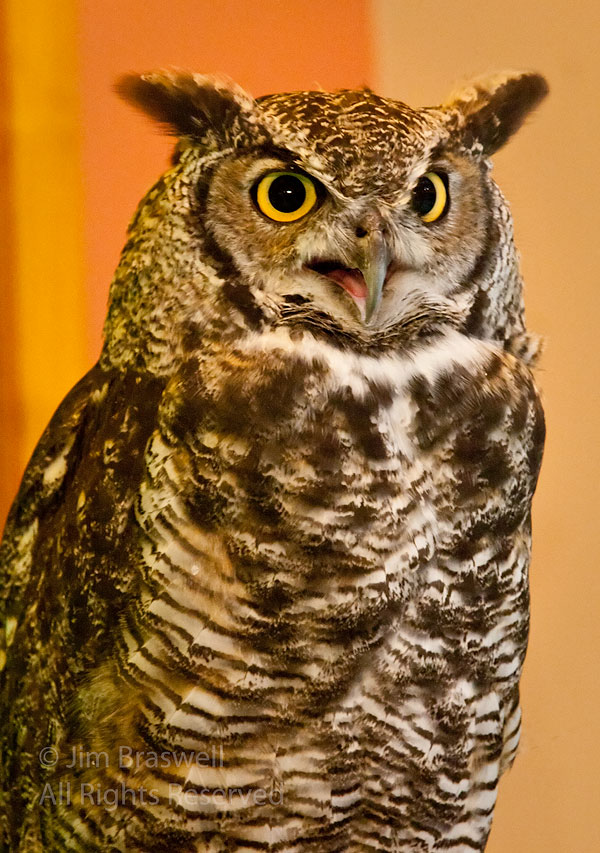 And then the Peregrine Falcon: 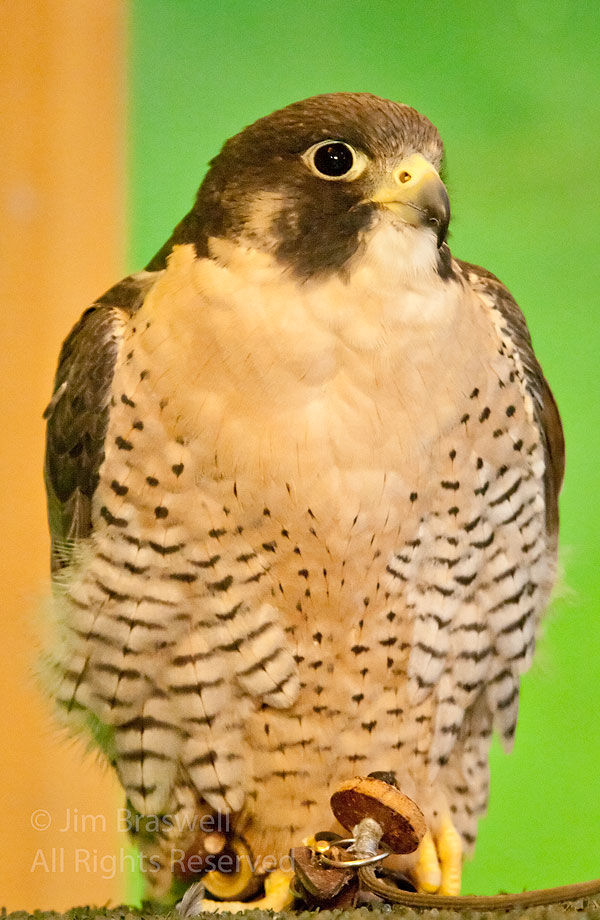 After the bird presentation, we were free to continue our exploration of Ketchikan. However, that liquid sunshine was beating down on us rather intensely. So, instead of sticking to our original plan of following Ketchikan Creek down the hill and into town, we opted to catch the free shuttle bus at the Totem Heritage Center and return to the downtown area in a dry fashion!

Tomorrow, I’ll share a few more images made around Ketchikan before we boarded the ferry for a 10-hour ride to Petersburg, where the photo workshop I was leading, was to begin.