Down, But Not Out!

A few weeks ago, I reported that I was preparing to launch into a new photo project. Well, that project is now complete and I’m about ready to share it with everyone. The project? Two weeks in beautiful Baja, photographing birds, whales and lots of beautiful desert scenery!

Although I’ve been home for a little while, I did run into some health issues as soon as I returned home. The day after I returned home, flu-like symptoms appeared and I began a period of total bedrest. Not the way I try to come home from a trip! But after plenty of rest and regaining my appetite, I’m starting to feel human again. I’m busy getting my Baja images downloaded and will begin the arduous task of editing very soon, so you can expect to start seeing some of the trip images very soon.  Until then, here is a post from a few years ago (“New Species”), about a pair of cooperative, but unphotogenic river otters:

Yesterday’s outing in the kayak was a a very memorable occasion, for several reasons. First, it was darned cold sitting in the water! The air temperature was hovering at 25°F, with a slight wind chill (guess my kayak outing days are numbered for the remainder of 2011). Secondly, the recent beaver activity at this location (it has been 2-3 weeks since I last kayaked here) has been incredible, but I’ll save that for another post. Thirdly, I found two traps set in the water at a couple of the beaver runs. This was surprising to me … working this area for over 2 years, I’d never seen traps set here. I later contacted the area’s state conservation agent to see if this was legal at this location; word is that trapping can occur if the trapper has a “special use” permit. Seems that there was one permit issued for this county and the agent is going to see if the traps belong to him; if not, they will be removed.

And the third reason is the “new species” I found … a Murphy’s Otter, which closely resembles the river otter. Ok, I really didn’t find a new species, but the river otters I found yesterday (there was a pair playing in the water) surely seemed to be what a Murphy’s Otter would be like … you know, “if something can go wrong, it will”! In the case of the otters, I desperately tried to grab some good shots, but the otters seemed to always be “in the wrong place at the wrong time”. For example, when I first observed the otters, one was playing in the water, but behind a heavy stand of wilting American Lotus stalks. And the other otter was out of the water and standing on a log, but again behind a lot of stalks: 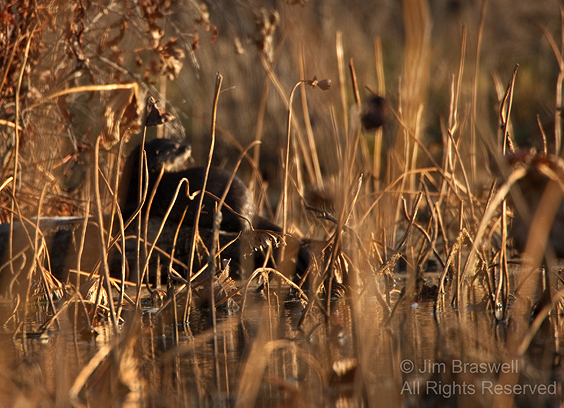 As you can see, I couldn’t get a good focus on the otter … the camera’s autofocus did focus in well on the stalks, though! In these situations, I normally use the “manual focusing override”, but complicating things is the fact that otters are not easy to photograph, even in the best of situations. They are very much like a 2-year old child, always moving about and sitting still only for a very brief moment. Combine all that with shooting from a kayak, and I think you can imagine the challenge of shooting an otter in these conditions.

As I tried to move the kayak a bit, for a better shot, the otter on the log went back into the water, only to resurface to watch me … again, behind a tuft of wilted Lotus stalks: 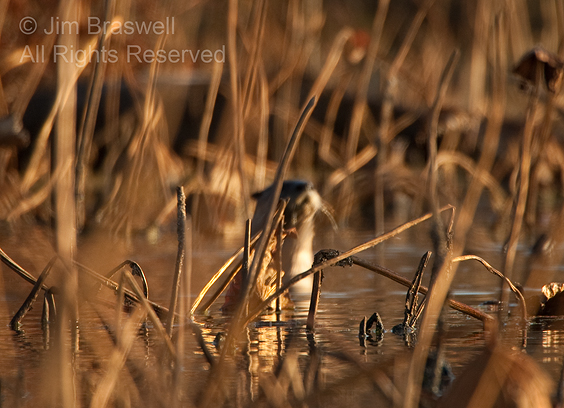 Shortly after the above image was made, the otters disappeared from my sight. Knowing their behavior (a bit shy, but certainly curious), I decided to paddle away from them and set up shop a bit upstream and wait/see if they would come to me. Within about 10 minutes, I observed something swimming towards an island that was directly in front of me. At first, I thought it was a beaver, but when it emerged from the water, I could see it definitely was an otter. As it got closer, I had a great shot … except for the tree/shrub branches between him and me!: 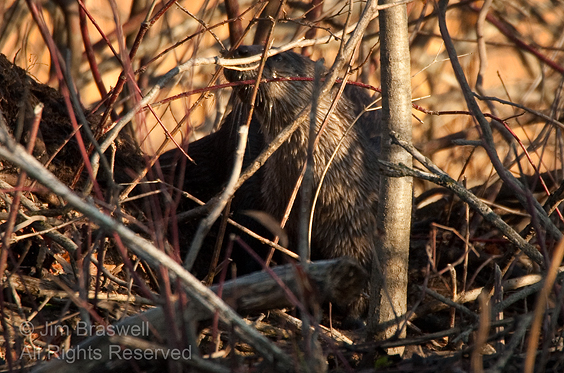 When I began making images of him, he heard the shutter of my camera and quickly slid into the water and swam away. But I finally got a “somewhat clean shot” of him in the water (although he almost made it behind cover!): 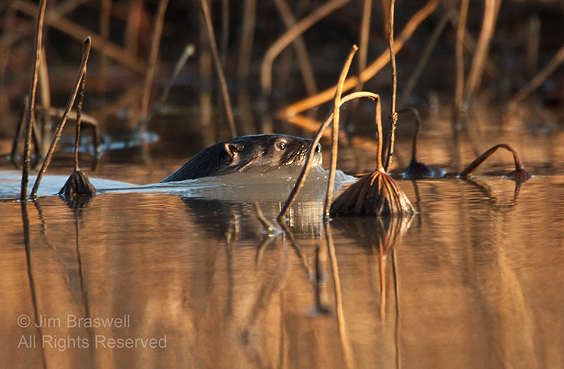 … and he made one final stop for another look at me … peeking from behind another Lotus stalk!: 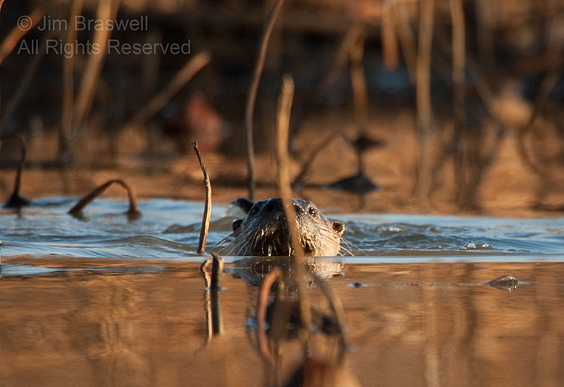 After he swam off, I remembered the two traps. So instead of trying to set up to get some more images, I kayaked to the traps and stayed there for a while, to make sure they did not wander into them. I certainly wish I could have grabbed some more quality images, but that’s Nature! Anyway, there will be more opportunities to catch this “Murphy’s Otter” :o)