Fun Friday: A ‘Pile’ of Pelicans

This “Fun Friday” post contains a couple of images I captured on my way home from my recent photo outing in the Pacific Northwest. Stopping by the Loess Bluffs NWR (formerly known as Squaw Creek NWR), I was hoping to find a few birds still lingering around from the spring migration. I arrived at the refuge before sunrise and was the first car into the refuge. As I rounded the southern end of the refuge, I was amazed at the sight ahead of me … a “pile” of American White Pelicans! I’m not sure of the correct term for a large group of pelicans … sea birds are know as “rafts”, so that may be the case with pelicans, too. But to me, it definitely was a large “pile”.

Typically, I find the pelicans near the middle of the refuge waters, making it difficult to get some nice images. But on this day, they were all huddled up at the edge of the refuge waters, just feet away from the refuge tour route. Staying in my car (using it as a photo blind), I was able to grab some up-close images of these beautiful birds. Here are a couple of images I captured around sunrise: 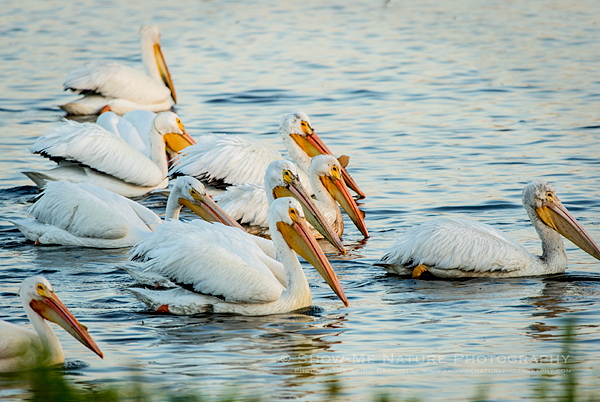 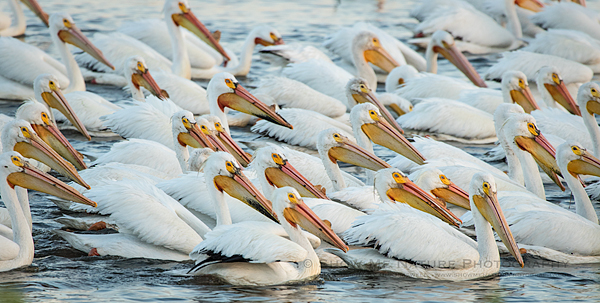 If you look closely, you will find a “keel” on the upper bill of some of the birds, a common trait the white pelicans have when entering breeding season. At a later time, this keel is shed.

I was certainly glad I was the first car on the refuge that morning. On my next drive around the refuge, there had been significantly more autos on the tour route and the pelicans had moved to the middle of the refuge waters … definitely true that the early bird gets the worm!