Fun Friday: And Now … the Rest of the Story

While photographing on the prairie the other morning, I came upon a Low-flying Amber-wing (Perithemis tenera) that landed on a dead twig. I carefully set up my tripod and captured a series of images. Here is one from that set of images: 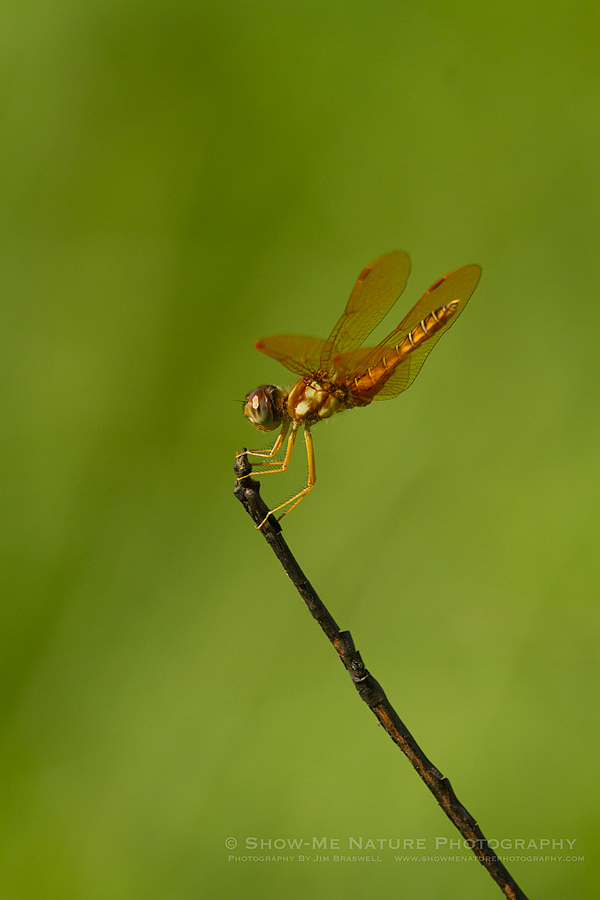 After capturing a few images (with the camera’s viewfinder still at my eye), a workshop participant observed a spider climbing up the dead twig, from near ground level. As it climbed up the twig, I captured a single image (Note: you can see one of the amber-wing’s lets at the very top of the photo):

Sensing an upcoming interaction, I slowly moved my tripod back a few inches, so that I could get both the amber-wing and the spider in the same image. As I again looked through the viewfinder to focus on the two insects, I saw that neither the Low-flying Amber-wing, nor the spider were on the twig! What happened?

My guess is that the spider lunged (after all, it is a Jumping Spider species) after the Low-flying Amber-wing. Did it catch it? Did it get away? I looked around below the twig, but couldn’t find either insect. But it was pretty dense with prairie grasses, so it would have been like looking for the proverbial needle in a haystack. Unfortunately, I’ll never know for sure. As Maxwell Smart would have said, “Mmmmm, missed it by that much!”