During my last day at the Venice Rookery (I spent 3 mornings photographing the roosting/nesting birds of the rookery), I decided it was time to capture some birds as they flew back to the rookery, carrying stick and branches in their beaks, for nestbuilding.

I had been shooting great egrets and great blue herons as they seemingly made countless trips from the rookery to some nearby trees, then returning with nest materials. But as often is the case, I end up capturing something completely different and don’t even know what I captured until I return home days or week later! Such is the case as this Fun Friday post.

Arriving home and downloading my huge collection of images captured throughout Florida (approx. 300GB or so of images) I began the tedious task of editing everything. Upon editing the Venice Rookery images, I found that one of my “nestbuilding” images was far from being that. I had managed to capture a Laughing Gull (Leucophaeus atricilla) flying over the rookery with a small frog in his beak! 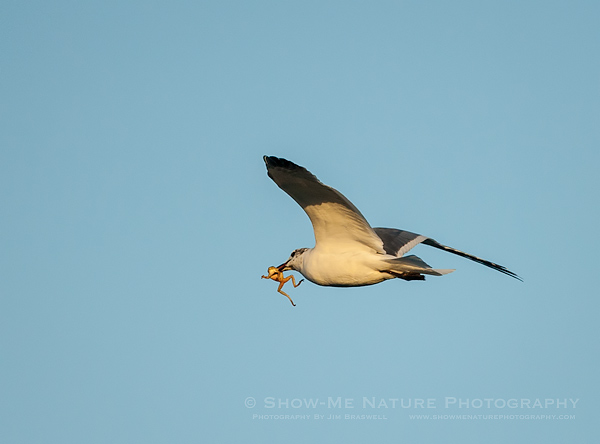 Goes to show ya never know what ya capture until you take a closer look!