Leave it to Beaver, or …

… “Anatomy of a Tail Slap”.  That’s what this post is all about.  I first found a couple of American Beaver (Castor canadensis) families last summer, while kayaking in a couple of different local Conservation Areas.  One of the things that has intrigued me is their powerful alarm system, the “tail slap”.  When danger is sensed, the beaver will voraciously slap it’s tail on the water, making a very loud bang-like noise that is audible for considerable distances.  This slap is meant to alert other beavers of the pending danger, as well as an attempt to scare away any intruders.

Ever since finding these populations of beaver, I have worked at capturing the tail slap through a series of still images.  Not only is this action very quick, but since the beaver activity is primarily nocturnal, the chance of running into a beaver is usually limited to low-light conditions such as around sunrise and sunset, making it very difficult to capture this quick action.  Another factor I have run up against is the fact that shooting from a kayak can be difficult, especially since the beaver seems to sense my intent and usually tail slaps behind me.  After studying their behavior over the past year, I have developed a better “feel” for when they are about to tail slap.  I’ve also perfected my maneuverability in the kayak, making it a bit easier to be able to photograph them.

As of late, after the long, cold winter, the beaver activity right now is very high and I have been alongside them, in “Rubber Duckie” (my trusty kayak), as often as I can get out and the weather cooperates.  This past week, I was semi-successful in capturing one of the beavers tail slapping me.  This action occurred about 8 minutes before sunrise, so the ambient light was quite low.  However, with today’s digital cameras, the sensors can often be placed in a very high ISO range and acceptable images made.  In this instance, I had the ISO set to 3200.  I did incur a bit of “noise” due to the high ISO, but Noise Ninja removed most of it.  This series of images was shot with an aperture of f6.3 at 1/80 to 1/160 second, not the best for quick action!  However, I did manage some decent shots.  I’m not totally satisfied with these shots, so it’s still on my “To Do” list.  But the tail slap is an interesting phenomenon and I’ve broken down the action below.

In this first image, a juvenile beaver (probably 1-2 years old) glides from under a bush along the bank’s edge beside me and Duckie, about 20 feet from us: 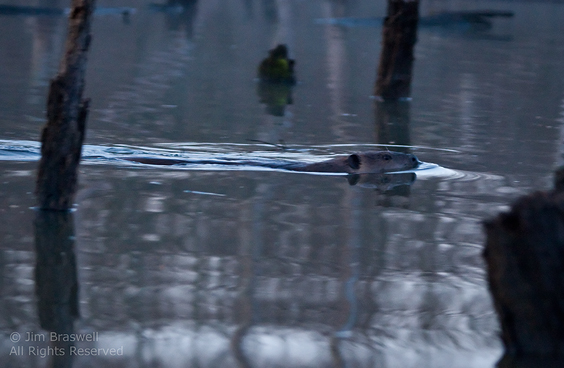 In this next image, the beaver has initiated the tail slap.  Note the “hump” in the middle of the action.  This is the beaver’s body as he tucks his head and begins a dive underwater.  The “hump” at the far left of the image is his tail.  He is in the process of raising it out of the water to get plenty of momentum for a strong slap: 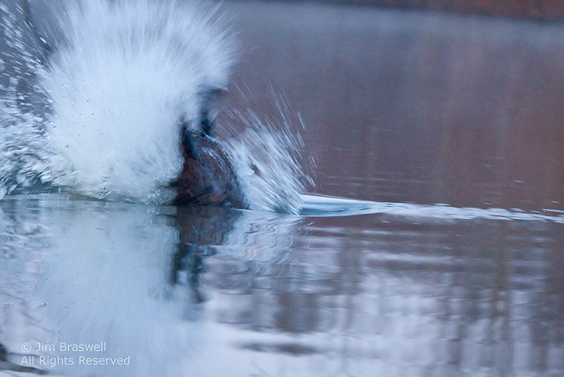 And in this next image, you can clearly see the hyper-extended tail.  It is past perpendicular and near to being parallel to the water surface.  It is at this point that the beaver begins the downward motion of the tail so that it slaps abruptly against the water surface: 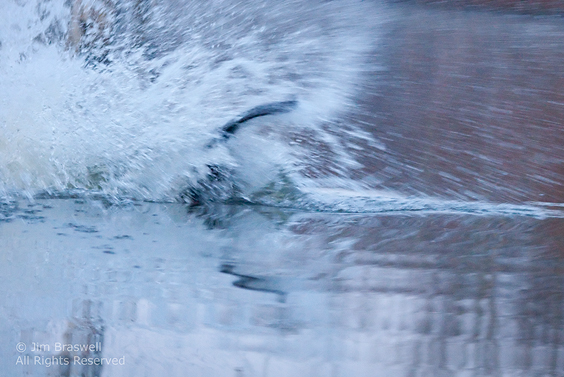 In this next frame, both the beaver’s body and tail are just below the water surface.  You can see a small indentation in the water (immediately to the right of the water about to land on the surface), which is where the tail was slapped against the water: 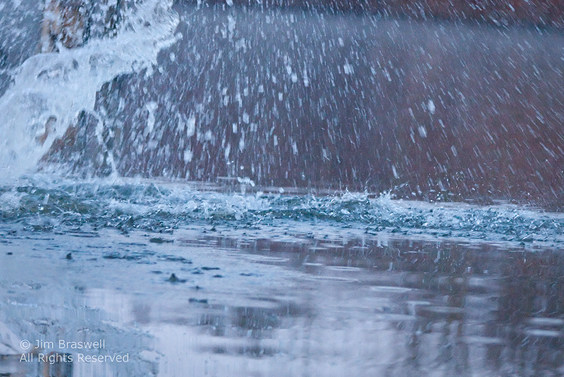 After the last image was taken, there was calm and quiet for a short time.  Then, up comes Junior as he swims away, as if nothing ever happened.  Couldn’t tell, but I think there was a smile on his face and I could sense his parting words to me, “Take that, you overgrown duckie!”: 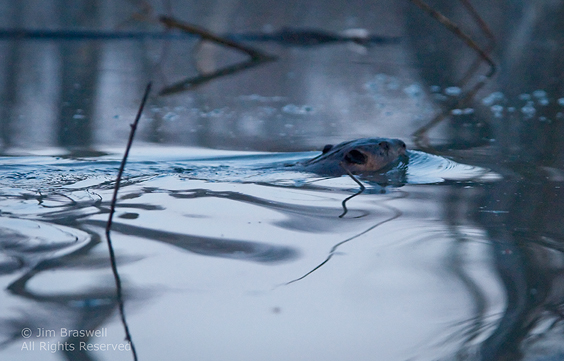