Lookie, But No Touchie!

On Saturday morning I drove to Blue Springs, Missouri, to take down my 27-print display that ran during the month of August at the Missouri Conservation Department’s Burr Oak Woods Nature Center (and thanks to those that have passed on kind words that they enjoyed the run!). Since I have never hiked any of the trails or photographed here, I decided to drive over early and do some shooting before I needed to pack up my prints. I had also been informed by one of my followers (thanks, Pat!) that there were some Indian Pipe wildflowers growing along one of the trails. Not having ever seen one in person, this was the ideal time to check it out.

While hiking the trail, we found several Indian Pipes growing (will be sharing in an upcoming post), but we also found a couple more wildflowers that were “lifers” for me. In today’s post, I’m sharing one of them … the Spotted touch-me-not (Impatiens capensis), sometimes called Jewelweed. Here are a couple of images I captured (note: I tried to capture a 3-D image, showing this flowers little “horn” that extends behind the flower, but it was just too windy and too dark (remember, we were on a trail in the woods) to capture a decent image of this feature. Hmmm, sounds like a return trip is warranted! :o) ). Here are a couple of images of this unique, woodland wildflower: 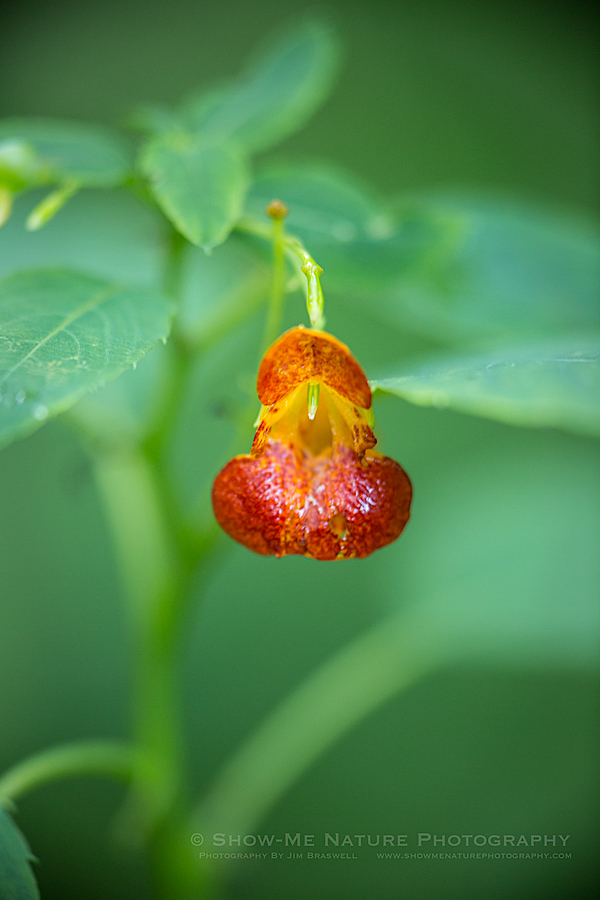 After I returned home, I did some research on the Spotted touch-me-not and found some interesting facts. It grows in damp, low woods, streamsides, swampy places, and bottoms of ravines. In Missouri it grows statewide (although this is the first I’ve ever seen!). This flower’s fruit is a slender capsule which, in drying or being touched, it contracts, coils and splits explosively, casting seeds far away, in all directions. I also read that it is widely believed that rubbing leaves and stems of Impatiens on the skin will prevent and even cure a poison ivy infection, and will also take the sting out of stinging nettle. Sounds like a great little plant to me!