Yesterday’s kayak outing was fantastic! It all started with the drive out to the launch area … we had a “cold” front move through on Sunday and this resulted not only in a grand sunset on Sunday, but the sunrise on Monday was also quite spectacular! In fact, I had to stop 4-5 times on the drive out to the Consevation area, to get some images (unfortunately, had to use my point/shoot camera since I didn’t have a tripod or wide angle lens for my Canon body with me). We had a nice layer of fog in the low-lying areas, with the sky a bright orange/red/magenta, so the landscape was quite remarkable (if images come out, I will post some on another day).

Got to the Conservation area, unloaded the kayak and paddled around the area. With the American Lotus (Nelumbo lutea) plants getting quite large now (some stems are 2-3 feet high), I had a “smart” idea … back the kayak into a stand of American Lotus, where I would be more difficult to be seen, and wait for critters to appear. Good in theory, but not too smart practically … remember yesterday’s post “Be Sure to Look in the Trees”? I was sitting there, relaxing and enjoying the cool morning temps and waiting for something to happen. Then IT happened … ever get a feeling you’re being watched? Well, I got that feeling and turned to look at the other side of the kayak. As I did, a 2-foot Diamondback Water Snake thrashed about and headed away from me … seems he had slithered in on top of the lily pads and was about ready to “hitchhike” a ride with me in the kayak! Boy did that wake me up!!! I immediately moved out of the Lotus grove and decided my camo clothing and kayak were darned good enough for hiding from critters!

No sooner had I moved out of the Lotus plants, I heard loud splashing in the water ahead of me, at the edge of the bank. Straight ahead was a tree that had fallen over and was lying partially in the water; the tree was still alive and fully leaved, but just not upright. As I approached the tree, up popped this little guy from the top of the downed tree: 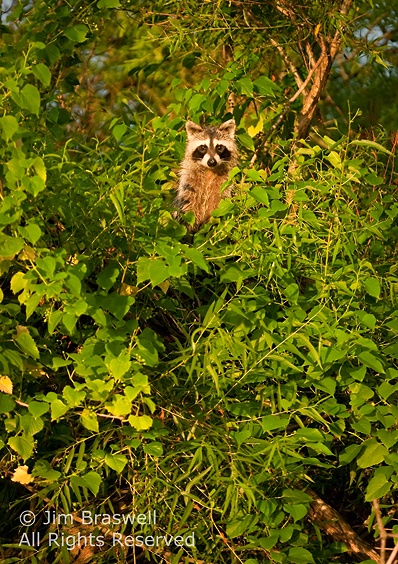 The above image was taken with my 100-400mm lens + 1.4x TC combination. I wanted to grab an “Environmental” shot, showing the raccoon in his environment. After a few clicks of the shutter, I then zoomed in with my lens to a telephoto mode to capture some closeups of him: 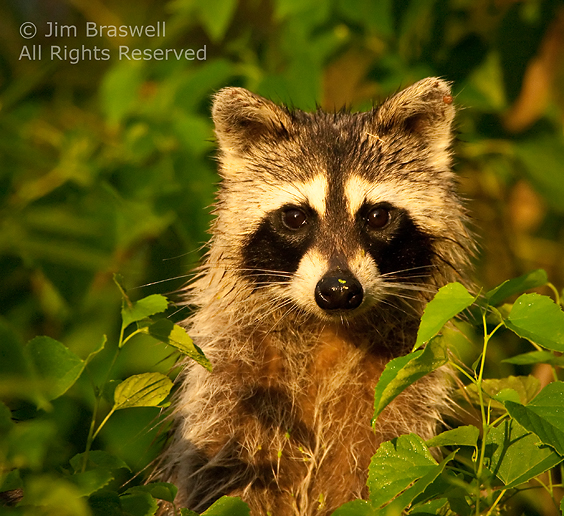 While I was watching/photographing this Common Raccoon (Procyon lotor), I was still hearing splashing so I eased the kayak around the edge of the tree and there were 2 small raccoon kits playing/foraging at the water’s edge! Then mom, who had been at the top of the tree, appeared at the base of the tree … then a third kit showed up, then a fourth! Ended up with 5 kits following mom around! Can you find the five in the following image (it was difficult to get all 5 in one photo with the telephoto lens!)? 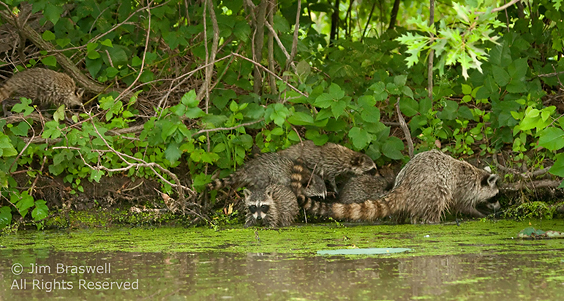 When not playing, the five kits were following Mom around, feeling at the water’s edge with their front paws for a snack: 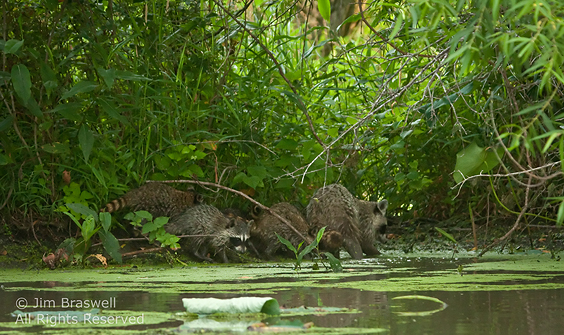 I had been wishing for a raccoon family to appear. About this time last year, there were a couple of families that routinely visited this area. After photographing the raccoons for a while (they weren’t at all bothered by my presence), I left them to their task and paddled around to see what else I could find. The American Lotus (Nelumbo lutea) are really beginning to bloom right now, so I spent some quality time photographing these beauties, including some macro images. I’ll post some of my favorite Lotus images in a few days. All in all, a heckuva day on the water!