In yesterday’s post (“What Would You Do?”) I featured a towering waterfall located in Ouray, Colorado. The photo of the entire Cascade Falls shows the magnitude of this beautiful waterfall, but (at least, to me) seems to gloss over the many smaller features of the falls. I posed the simple question, “What Would You Do?”. I did this for a couple of reasons: (1) to get you to think of how you would best show this waterfall in photos you might make, and (2) not being a longtime landscape photographer (but which I am trying to learn all the intimate details of how to better my landscape images), I wanted to see what your thoughts/ideas were.

But back to my photo trip … what did I do? Well, using the old phrase “Divide and Conquer”, I broke down the waterfall into smaller, simpler segments and then composed images of these smaller parts. And how did I define what I would photograph? Well, I first put on a longer lens (my Canon EF100-400mm, f/4.5-f/5.6, IS lens) and zoomed around the falls, looking for things that caught my eye, or things that seemed to represent the waterfall’s beauty. Here are a few images of what I came up with.

First, I started at the top of the falls and worked downward, until I found my first interest, the topmost part of the “cascading” falls: 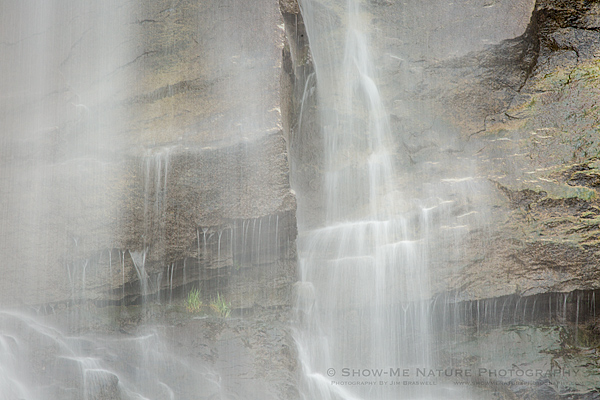 The next stopping point was 2 medium-sized boulders that caught my attention (towards the top of this photo). And I really didn’t like the large boulder at the bottom of the photo (seemed a bit “out of place”), but left it in, anyway: 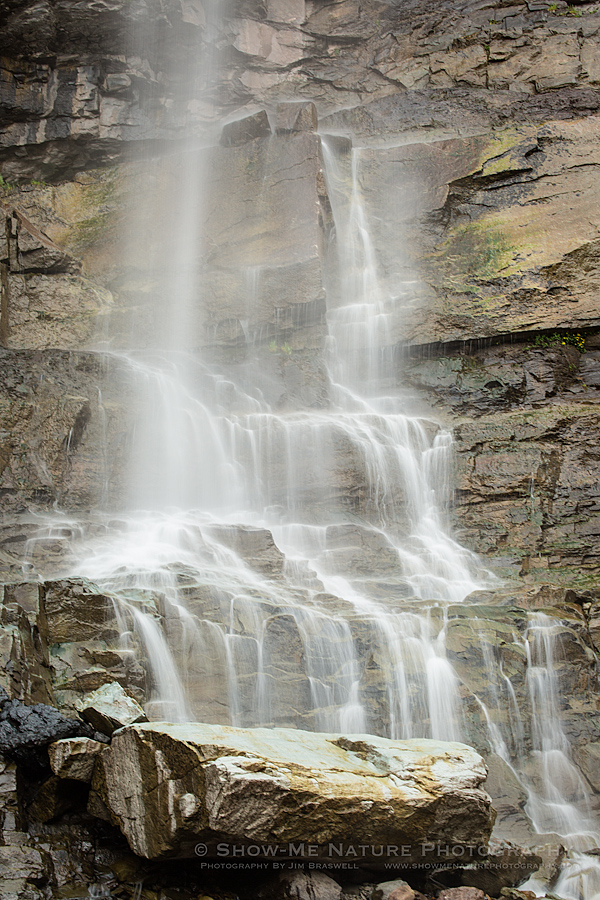 Moving in a bit tighter, I focused on the 2 boulders (and cropped out the large boulder): 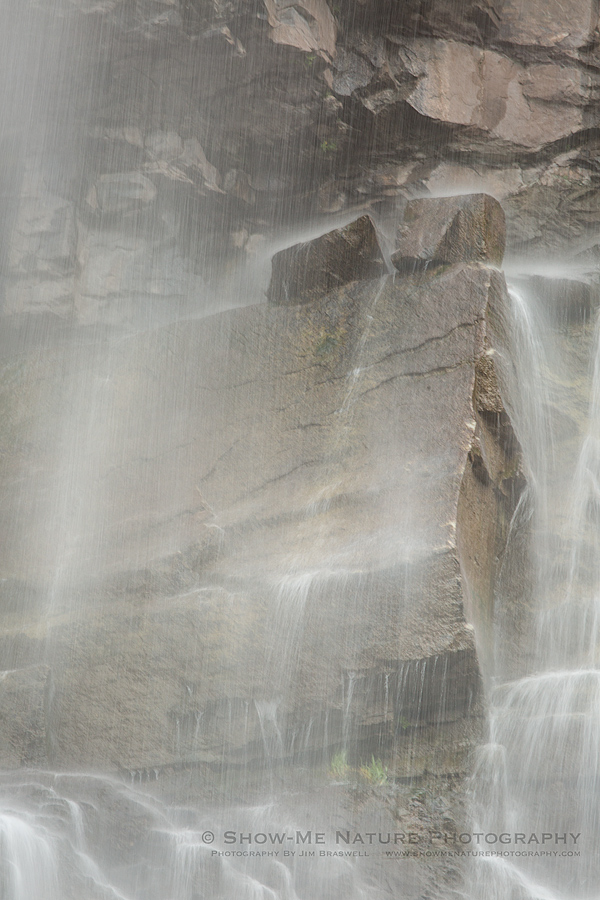 Following the falls downward, I made several captures of the large, cascading shelf (seen towards the bottom of the above photo): 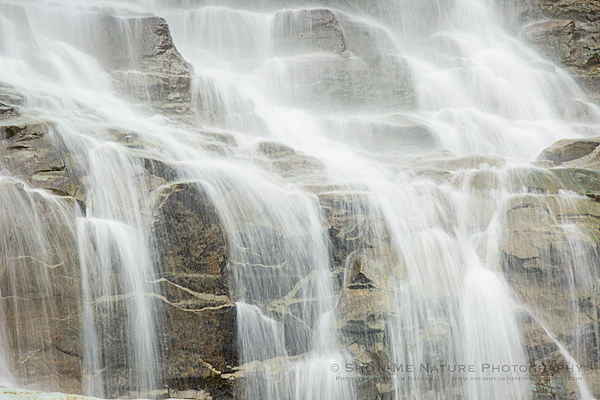 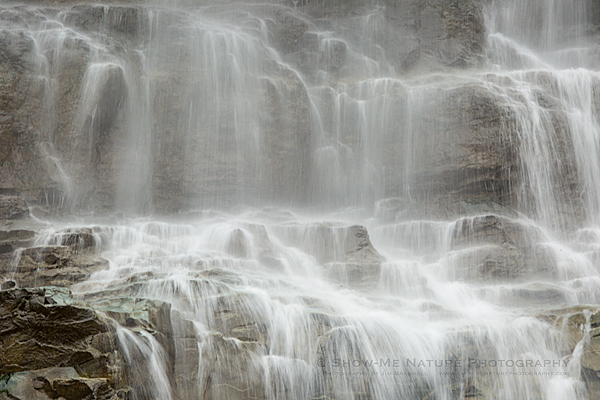 And finishing my autopsy of the falls, I captured several images of the water flowing around the colored rocks that were present in the resulting stream: 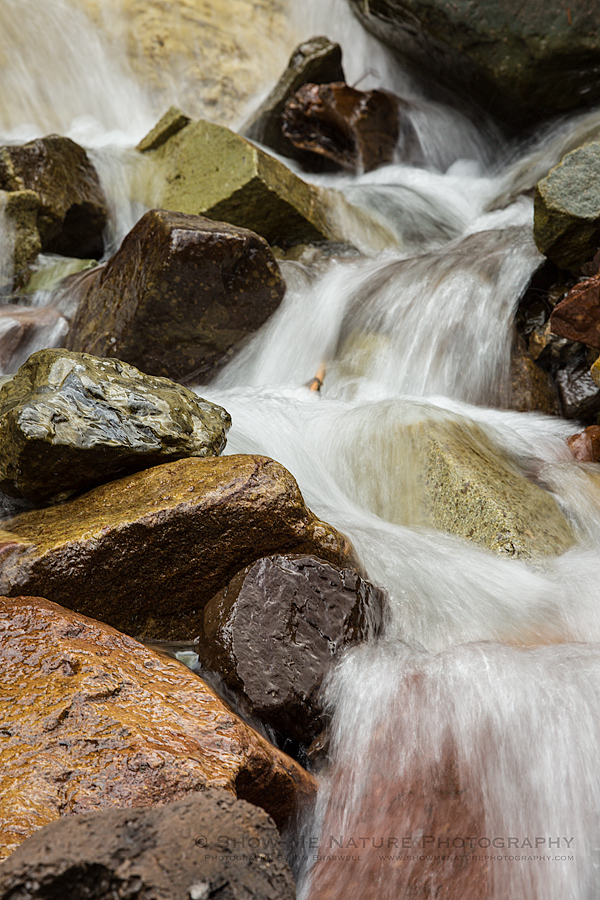 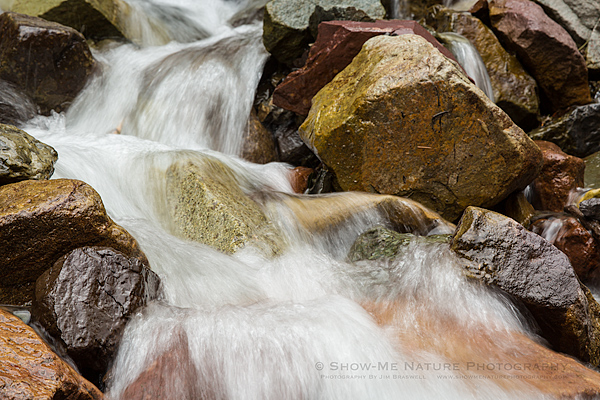 Being part of a group, we had limited time at the falls, so we would not miss our afternoon jeep tour into the mountains. So there was not a lot of time to think about the strategy to capture the falls. And being my first time to the falls, I had no idea what to expect before seeing the falls. So tell me, anything I missed (for when I revisit the falls on my next trip to Ouray)?