Yesterday’s kayak adventure will be hard to beat … may never beat it! I was really hoping to get some more images of Momma Raccoon with her 5 little kits, but didn’t see them. The area where I am now working is owned by the Missouri Department of Conservation (MDC), but started out as a privately-owned duck hunting club. It is 67 acres in size, with a 20+acre marsh area (where I kayak) that was man-made for ducks. The water is only 24-36″ deep, so the critters living/visiting here are somewhat limited.

As I waited for the raccoons to show up, I sat quietly and enjoyed the cool morning air and quiet stillness. Then, a load noise “awakened” me from my quiet time; from on the other side of a nearby group of American Lotus lilies, a loud splashing sound was clearly heard. Thinking it was either a beaver playing in the water, or perhaps a deer shloshing through the water to get to one of the area’s many man-made islands, both scenarios which have played out in front of me on several occassions, I headed Rubber Duckie (my trusted kayak) in that direction. After circumnavigating 2-3 foot Lotus stalks, I came around the edge of the lilies and there was a beautiful River Otter (Lutra canadensis) in the water. Don’t know if he was fishing or just having fun … river otters are great at either chore! When he saw me, he immediately swam about 50-feet away, then raised his head and upper torso completely out of the water to see what the heck I was doing there. He would hold that pose for a few seconds, then back down in the water, just to reappear somewhere else and continue his surveillance of me. This continued for about 3-4 minutes. Then, I thought I’d leave him to his area … maybe if I didn’t disrupt him too much, I’d see him again at another time.

I paddled back to sit and wait for the raccoons … none to be found. However, I did get to photograph some more Diamondback Water Snakes swimming by, as well as some birds that would fly into the area. After about 15 minutes, I felt/heard a faint “thunk” as something hit the kayak. Remember, the water is only 24-36 inches deep here, so anything swimming under the kayak can hit the kayak. Something hitting the kayak is not unusual. I have had Beavers run into the kayak several times (on purpose, I believe) and even some large snapping turtles or fish have wandered into Rubber Duckie. No big deal … sit back and wait some more ….

Then, with no warning, my kayak began moving “backwards” in the water. Now, if there was wind, I would not have been surprised. But no wind this morning. I stuck my paddle into the water and tried to turn it around so I could see what was going on. As I did that, a tremendous amount of splashing erupted right behind me, spraying water all over Rubber Duckie and me. My worst fear? Either a large Diamondback Water Snake had gotten caught in my kayak’s rope handle (I have rope handles at both ends of the kayaks, that are used to transport the kayak on solid ground; when in the water, these handles fall into the water) … either that, or one of those darned Snapping Turtles (who can get quite large!) had tried to eat my handle! Either way, I could see I was not going to be Winner in this event! And as I paddled, I felt quite a bit of resistance to trying to paddle.

But as I really put some muscle into paddling, I managed to turn the kayak just enough to see a furry head lift up out of the water, with the handle in his mouth … it was my new otter friend!!! Guess he wanted to play a game of Tug-of-War with me! Anyway, he maintained his grip … and I maintained my attempt to paddle … until he finally gave up and let go of the handle! Oh, how I wish he had grabbed the front handle … some nice images of this little game would have been a real joy! But I’m not at all disappointed … after all, this is an experience I will never forget … Never!

Here are a couple of images I made of the otter during the initial discovery of him: 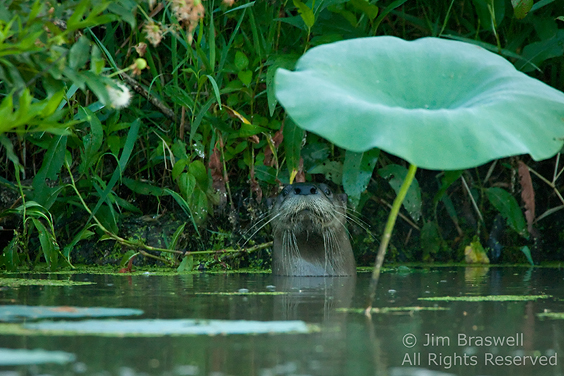 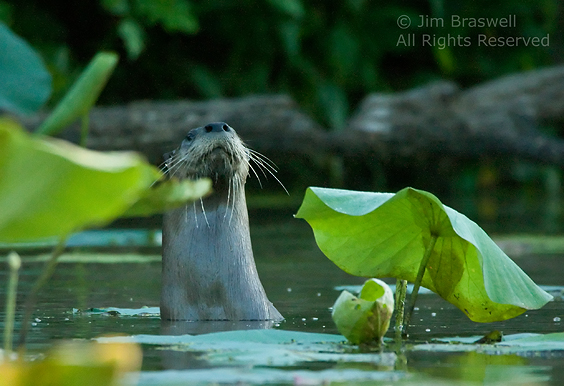 Maybe, if lucky, I’ll again run into this playful little otter one day!