Near the summit of Mount Evans (Colorado), I ran into a couple of different places where I found some Pika (Ochotona princeps), which are also called cony, whistling hare, or piping hare (the latter two names being associated with the sharp “whistle” they let out when intruders are nearby). These guys are very small, only about 6 1/2 to 8 1/2 inches long and weigh only ~4 ounces! But they are very cute, resembling micro-miniature bunny rabbits in some respects, especially the large ears they have. They are extremely quick and can be difficult to photograph, especially when they are scurrying about. Here is an image of a Pika with wildflowers stuffed in his mouth: 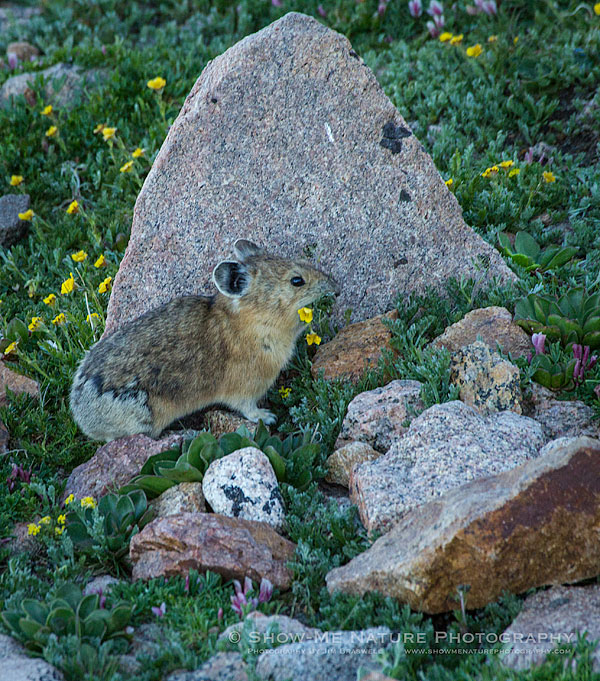 Shooting the above image was not too difficult, as the Pika was standing still. But when trying to photograph a moving Pika, be prepared to get a lot of out-of-focus shots! Or even some images where the Pika is not even in the frame! But watching the Pika for a few of his trips to collect wildflowers can give one some very useful information that will help get a good photograph. One of the things I noticed is that the Pika will usually have a couple of different routes that he makes, from his den to the foraging field. So, by studying his routes, you can prepare yourself and have better chances of capturing the moving Pika in the frame. It also helps to set your camera controls to get a fast shutter speed; if you use shutter speeds of < 1/250 second, I can almost guarantee you will have some very fuzzy images of the moving rodent. I recommend increasing the ISO to 500-800, combined with using the largest aperture (i.e., the smallest f-number)  your camera has. This should help to get a shutter speed of 1/500 second or faster. Here are a couple of images I captured of the moving Pika.

In this first image, the Pika is running directly towards me, but by studying his route, I was ready for him: 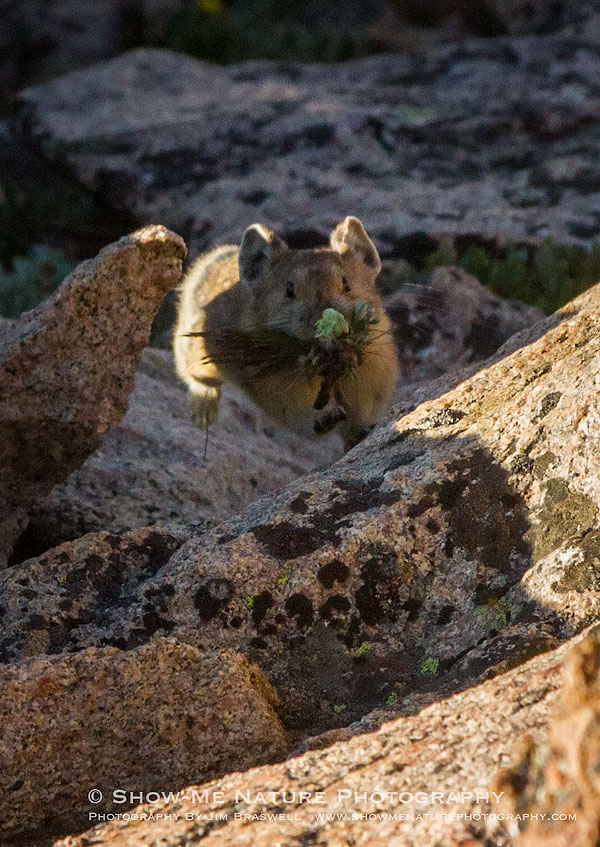 In this next image, he is getting close to his den as I captured him jumping from one rock to another one, during his run back to the den. Again, I knew his route and patiently waited for him to come into view: 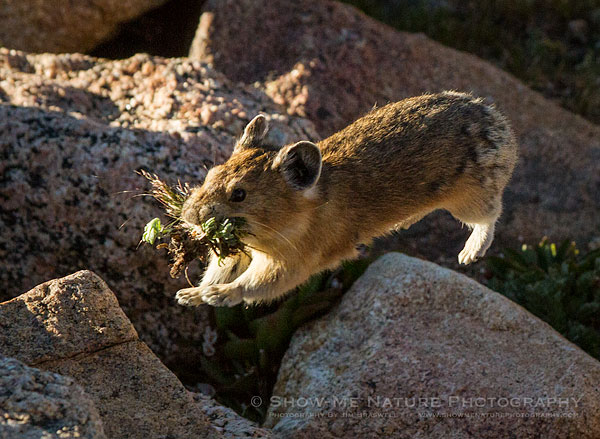 The Pika’s habitat is talus slides (i.e., loose, rocky areas, such as where mountain avalanches have occurred), rocky banks, steep boulder-covered hillsides. Their typical range is 8,000 to 13,500 feet in elevation. Reports state that Pika are extremely sensitive to temperatures below ~70F, so you will only find them at these high altitudes, where the temperatures, even on warm days, are nice and cool. And there are reports that the Pika is becoming endangered, primarily due to the earth’s changing temperature patterns. Let’s hope that this little gem can survive!