The next photo stop on my recent Florida tour, was the famous Venice Rookery, which is located in Venice, Florida. Oddly, this wonderful rookery is right in the middle of town, surrounded by housing areas, a couple of major roadways, and sitting just behind the Florida Highway Patrol headquarters! The Venice Rookery is a rather small island in a small, but deep pond. The island is covered by shrubs and bushy plants, making it an ideal place for birds to build nests and raise their young. And patrolling the pond is a resident alligator, keeping small mammalian predators (like raccoons, etc.) from swimming to the island and feasting on eggs and young birds. Until this trip, I was beginning to wonder if the alligator was a myth to keep humans from trying to reach the island. But during one of my three mornings at the rookery, the gator swam slowly around the island, so I can now attest that “Yes, Virginia, there is a gator!” And not only do nesters use the rookery island. There are several species that use this “safe house” as a roost. As sunrise approaches at the rookery, many of the hundreds of birds that roost here begin leaving the island for feeding. Among the birds I saw using the rookery before sunrise, were the Great Blue Heron, Black-crowned Night Herons, White Ibis, Glossy Ibis, Cattle Egrets, Great Egrets, Snowy Egrets, Little Blue Herons, Anhingas, Double-crested Cormorants, Tri-colored Herons, and Green Herons. Here is an image I made before sunrise at the rookery, using flash to illuminate the rookery. How many bird species can you find? 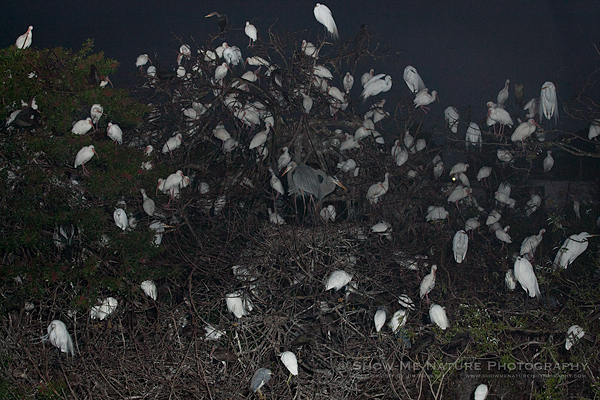 And seeing the mass exodus of birds at sunrise (mostly cattle egrets, who feed elsewhere), it certainly reminds one of the classic Alfred Hitchcock move, “The Birds” :o)  Next up, I’ll feature some of the birds of the Venice Rookery, some nesting, some with chicks, and some just being pretty. Photo Equipment Used: