(Today’s post is a bit unusual. Because of the overwhelming activities and emotions surrounding experience my first total solar eclipse, the content is rather long.  So if you’d rather not read the “rest of the story”, please feel free to just scroll down to the photos)  :o)

Monday was a very mixed bag for me. Having never seen or photographed a total solar eclipse, I had waited a long time for the opportunity. And Monday was the big “E-Day”.

Local news had been forecasting “hordes” of people coming to Missouri for the rare eclipse, potential cell phone outages, turning interstates into parking lots, gas stations running out of gas, the entire gamut of possibilities had been heavily publicized for the past couple of weeks. So on E-day, I got up at 4:30am (the eclipse would not even start until a little before noon). I should note that I live only about 30 miles from the path of totality. Meeting some friends at 5:45am, and stopping by my younger daughter’s house at 6:15am, we began making our way north to our pre-determined location for viewing this spectacle (we were welcomed by some friends of my daughter/son-in-law … thanks Josh and Stacey!).

I had been on pins and needles for the previous 48 hours as the weather was very unpredictable, at best. As it turned out, when we arrived at our location the sun was visible, but a skyfull of clouds was rushing towards it. As eclipse time grew closer, the clouds covered the sun and we even got some rain showers. At “first contact” (when the moon first hits the sun) appeared, the clouds were still covering the sun. Drats! But about 10 minutes later, the rain stopped, the clouds began to break up and it was clearly evident that the moon was eating away at the sun! As it worked out, the skies continued to be laden with clouds moving by, but there were frequent breaks … enough of them to see and photograph the entire partial eclipse!

As totality approached (a few minutes after 1:00pm where we were located), the sun/moon were still visible, but clouds were still pouring towards the eclipse. And with totality lasting only about 2 1/2 minutes, I was really concerned that the totality portion of the eclipse would be totally hidden by the clouds. But I was wrong! The cloud cover was high, thin clouds and most seemed to part and flow around the sun/moon. Those that floated over the sun/moon were wispy enough that you could still see the process of reaching totality. This was what I had been waiting for … seeing and photographing all the interesting features of totality:  the chromosphere, Baily’s Beads, the 2 Diamond Rings, hopefully some Prominences, and the glorious Corona of the sun.

As totality began, I was like an octopus … photographing very quick bursts to capture all of these magnificent and brief segments of totality, while still looking away from the camera at times, so that I could “experience” the realness and uniqueness of this marvelous spectacle, firsthand with my eyes! But after shooting a bit, I quickly looked down to see how well the images were being recorded by the camera. Gasp! I saw nothing on the LCD! Trying a bit more, I got the same results. At that time, I remembered the “words of wisdom” that I often gave to others that I worked with on the techniques of eclipse photography, at my class earlier in the year: “If you have any problems with your camera, abandon plans and keep your eyes on the amazing sights above you!”. Doing just that, I watched in awe as the chromosphere showed around the moon, then some Baily’s Beads sparkled at us, then total darkness and the appearance of the glorious corona. After a short time, the second Diamond Ring came out. Although it lasted only a few, brief seconds, it was brilliant and perfectly formed! I just sat there, a tear in my eye, in utter amazement of the beauty that God set out for us to witness and enjoy!

As totality ended and the sun began to reappear, I leaned forward and began to photograph the second partial eclipse phases. But that abruptly ended when clouds overtook the sun/moon. It was never to be seen again. In fact, about 15 minutes later rain began and continued for a very long time (fortunately, I got my equipment down and packed away before the rain began).

So, although I didn’t get any images of the precious spectacles of totality, I did witness them with my eyes. And they will be forever branded into my memory! If you ever get the chance to witness a total solar eclipse, please don’t be satisfied with staying outside the path of totality to watch a partial eclipse … make the effort to get within the path of totality!

Here are some of my partial eclipse phases I managed to capture (Note: the sunspots that I photographed in “Sunspot, Baby” post, are still present and can be seen in several of the photos): 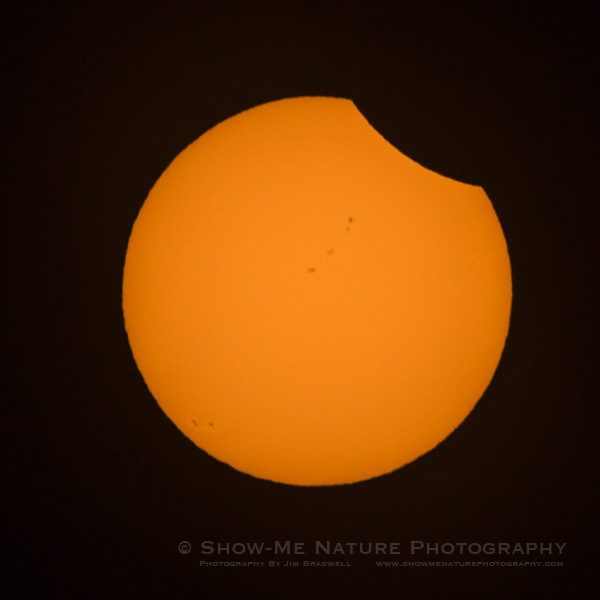 And I just loved the effects of the clouds floating over the eclipsing sun! 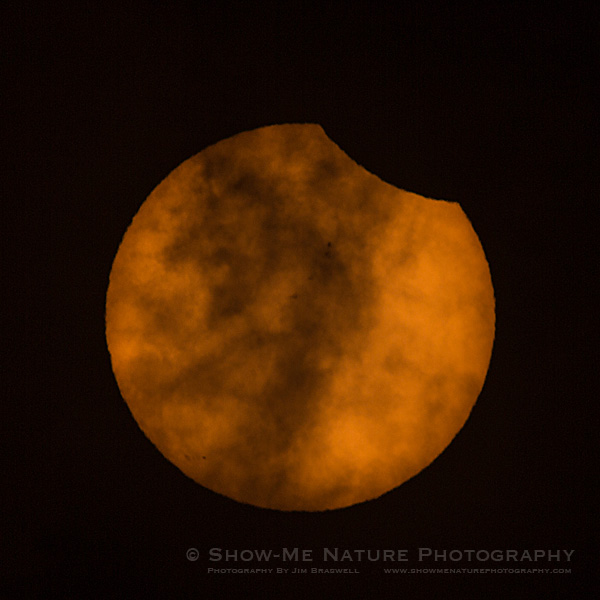 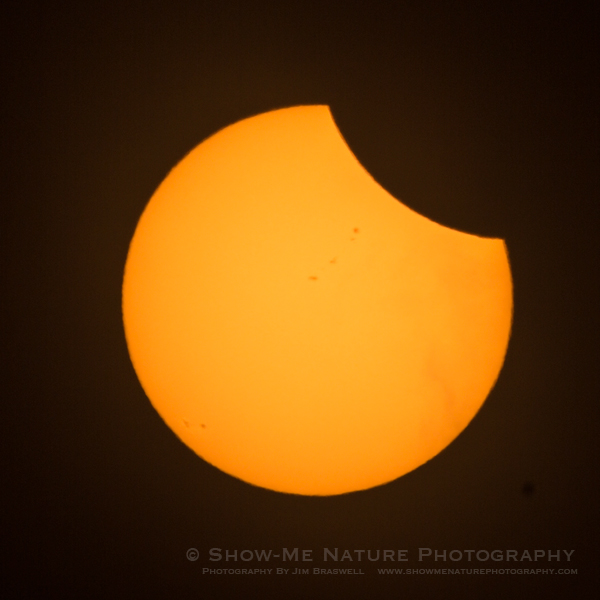 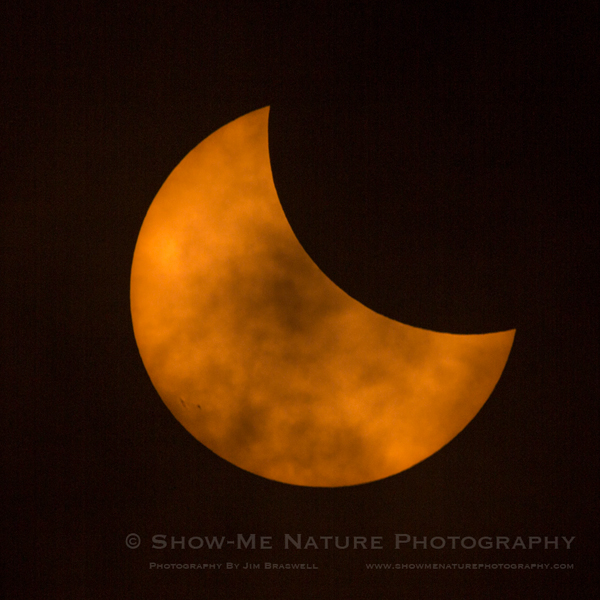 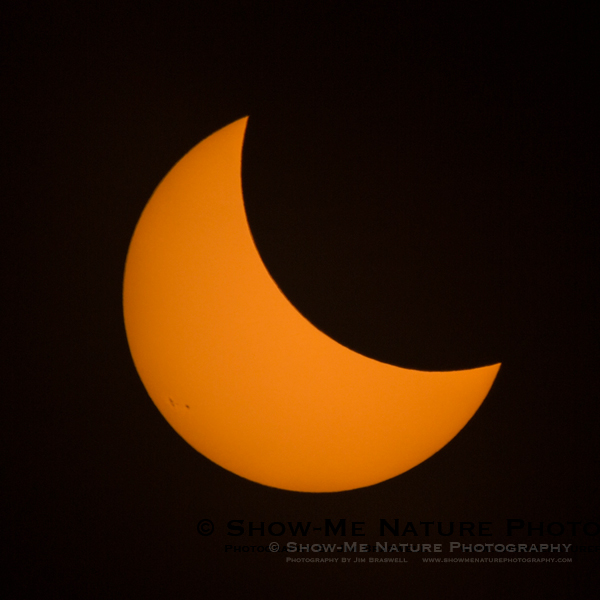 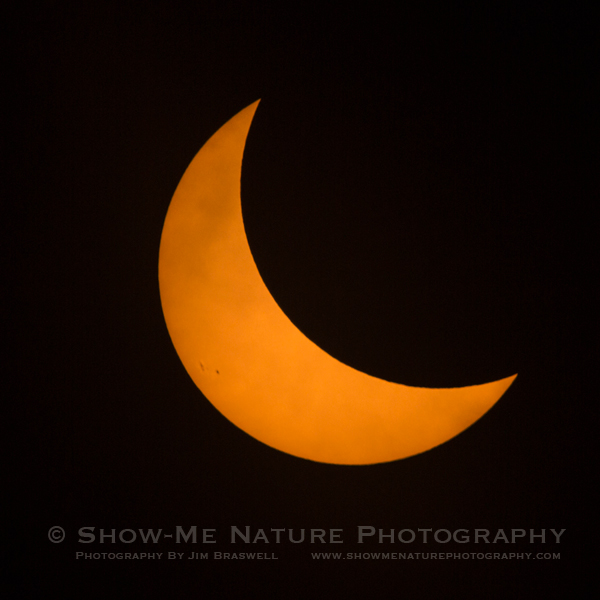 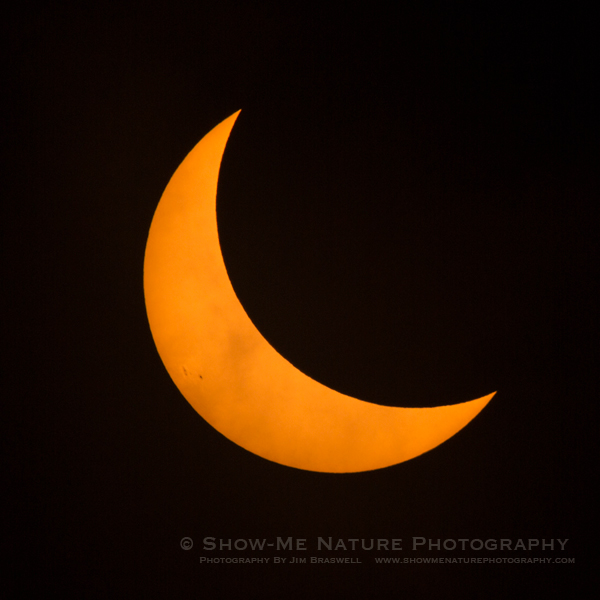 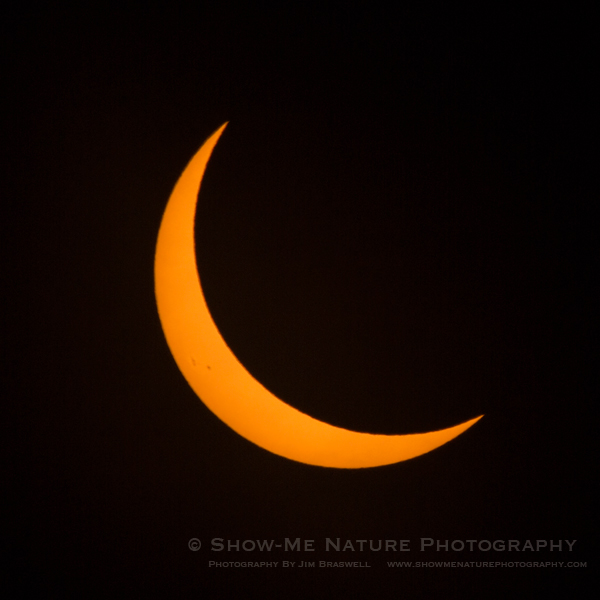 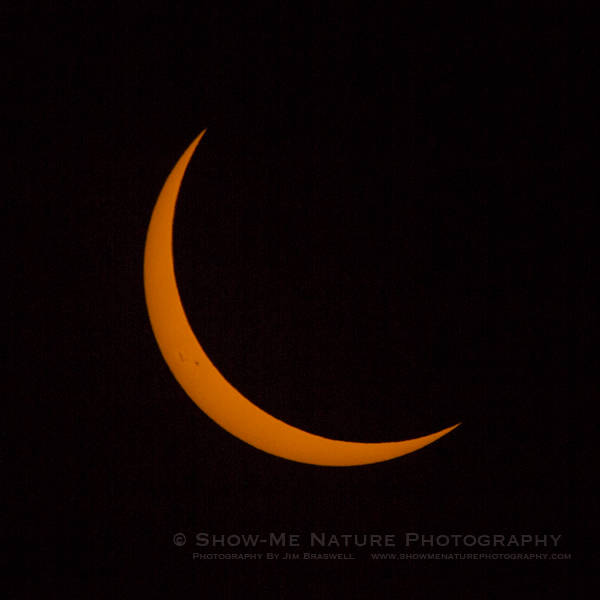 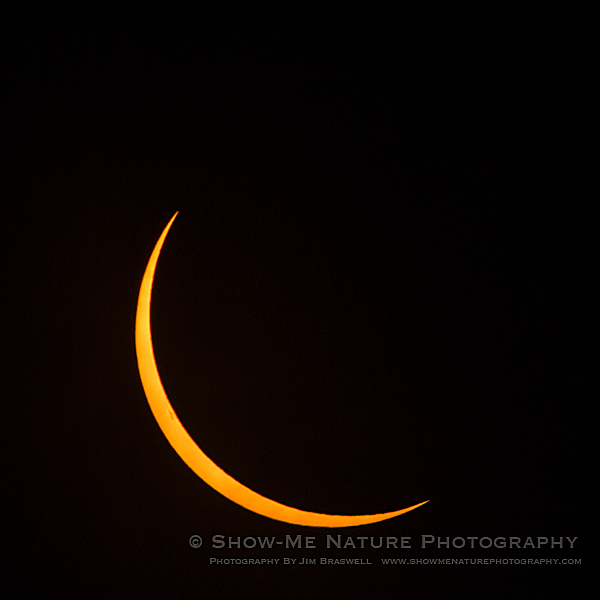 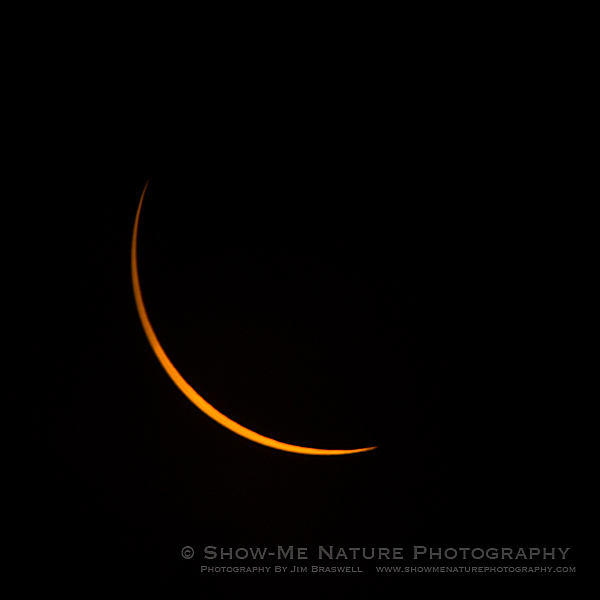 And as eclipse neared, only a very small portion of the sun could be seen: 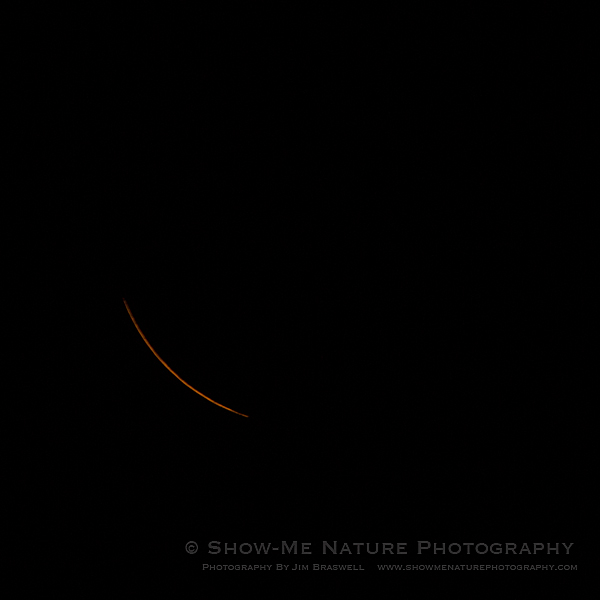 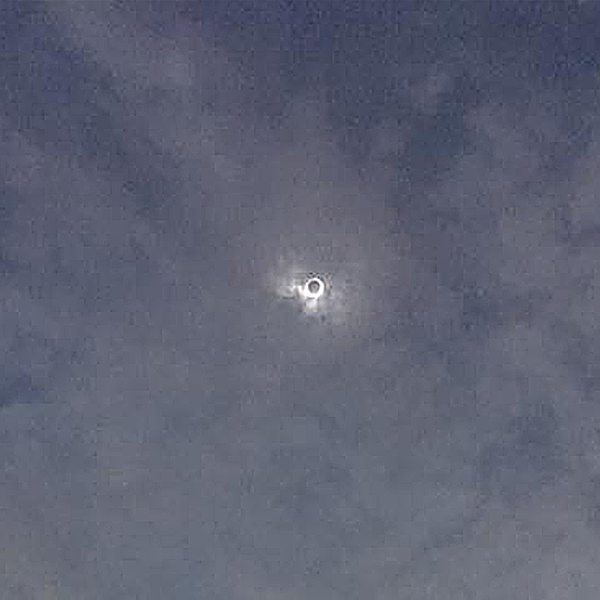 After only a couple of minutes, the sun began to reappear from behind the moon: 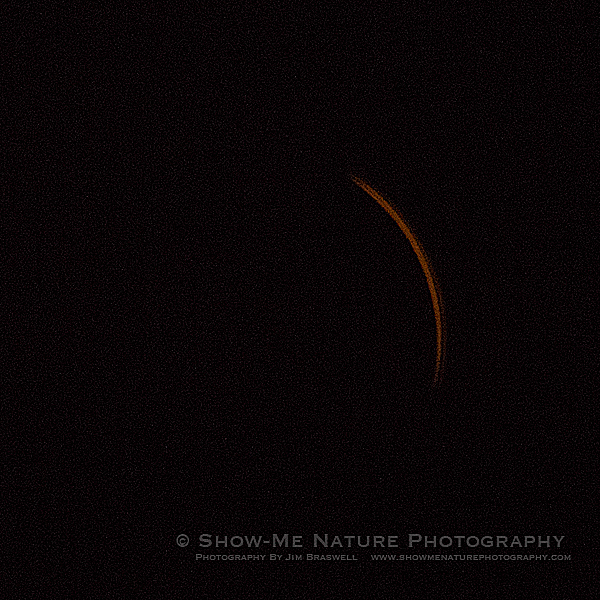 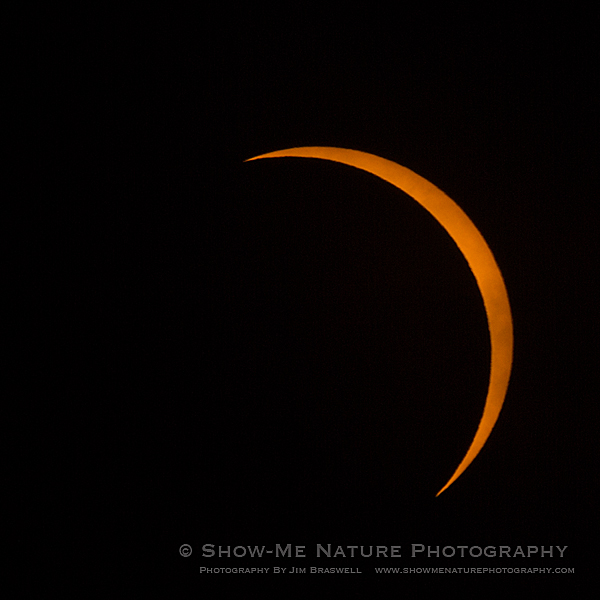 At this time, the clouds built in so thick that you could not even detect where the sun was located, so this was the end of my shoot. Here is a shot that my daughter captured with her cell phone, showing my photographic setup. Note how I had to position the camera/lens almost straight overhead to capture the eclipse. This made it more difficult to photograph. Also, in my practice runs in the days leading up to the eclipse, I realized that I would need to stake down the tripod due to the elevation of the sun (to the right, you will see a backup setup that was covered with a tarp, in case of rain): 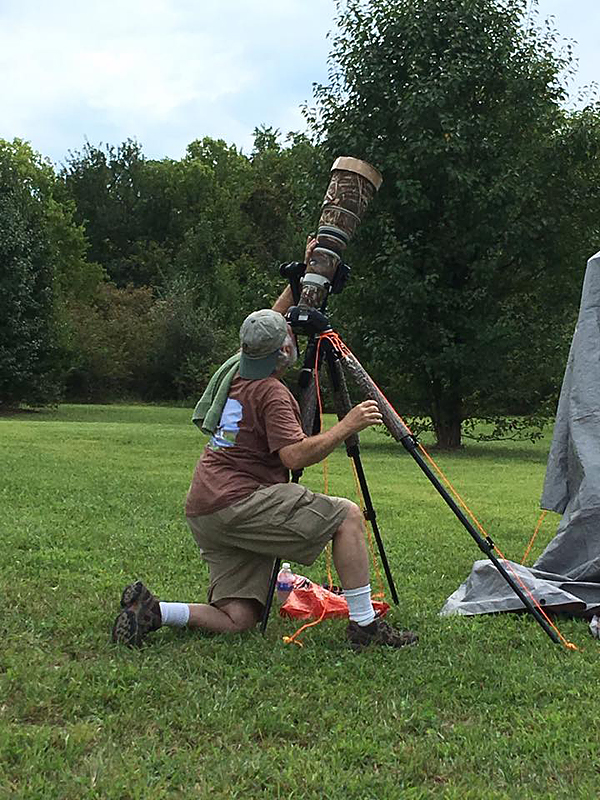 By the way, here is “the rest of the story”. As soon as cloud cover prevented me from shooting, I was scratching my head and wondering what had happened to prevent me from capturing all the “neat” stuff during totality. After all, immediately before totality I had reset all the camera settings (ISO, shutter speed, aperture setting) to what theoretically would have given me the images I was after. Noting that all were set correctly, it suddenly hit me like a rock … I had failed to remove the solar filter on the front of the lens! Drats! I had become so involved with the beauty of totality, that I failed to remember to remove the filter over the front of the lens! I knew better … I had practiced the sequence several times in the week before eclipse. But the emotions of the moment won out. That’s ok, at least I was able to watch the glorious totality with my eyes. And I’ll try again in 2024, when we have another total solar eclipse across the U.S.!

Although I feel embarrassed that “Mr. Photographer” didn’t get any of the interesting totality images, I do feel very fortunate and appreciative that I could witness this rare event, in real time, with my own eyes! And like I said, there will be another opportunity in 7 years.