Today’s post is about another interesting area, not far from Anan Creek (the subject of my last 4 posts). The area I’m referring to is “Shakes Lake”. Before we get into the images, let me explain a bit of history regarding the “Shakes” name, which is common around the Wrangell, Alaska area.

The title of “Shakes”, or as it was originally known, “We Shakes”, was conferred upon Chief Gushklin of the Stikine Nan-yan-yi Tlingit (native inhabitants of the Wrangell area) settlement near present day Wrangell, after a victory in war against the Niska Indians of British Columbia. The Niska Chief “We-Shakes”, rather than submit to the degradation of being a slave to the victorious Tlingit Chief removed his “killer whale” hat and placed it on Gushklin’s head, giving him his own name “We-Shakes.” For reasons unknown, the name has since been shortened to “Shakes.” The distinguished title has been handed down through the generations from Chief Shakes I to Chief Shakes VI. In the Wrangell area, there is a Shakes Island, Shakes Tribal House, and a short distance away on the Stikine River, Shakes Lake … with Shakes Glacier at the one end of the lake.

On our last visit to this area, we only had one day to “shake it up”, but did manage to get to Shakes Lake (Shakes Glacier) for an afternoon. Here are some of my favorite images from that beautiful location.

As our jetboat maneuvered the Stikine River, we came upon this Bald Eagle (Haliaeetus leucocephalus) perched on a downed tree in the Stikine: 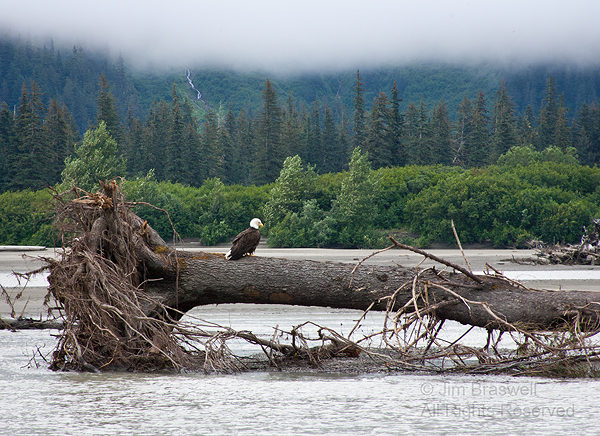 About 15 minutes or so later, our jetboat turned a corner and straight ahead was Shakes Lake, with Shakes Glacier at the far end. In this image, you can see the entire face of Shakes Glacier; certainly not big (especially for Alaska standards) but still a treat to see the blue glacial ice. And with the glacier being on the small side, with essentially no “calving” (glacial ice breaking off from the glacier), we were able to get right up to the face of the glacier:

After a few minutes of cruising the glacier’s face, we headed around the lake. A short distance later, we came upon this iceberg which had calved from the glacier: 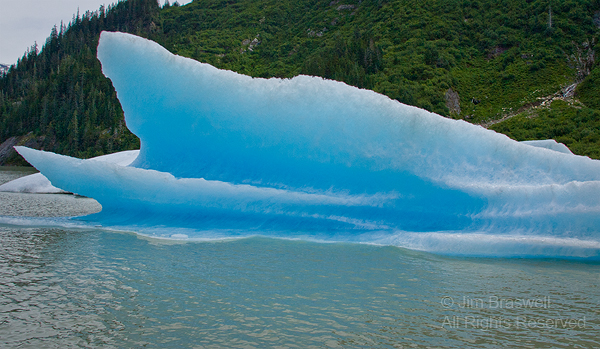 Shortly after, we landed our boat on the beach and spent some time wandering around, exploring the area that surrounded Shakes Lake. This scene was one of my favorite. In the foreground, fireweed is blooming profusely, and you can see a small mountain stream that winds down the mountains to the lake: 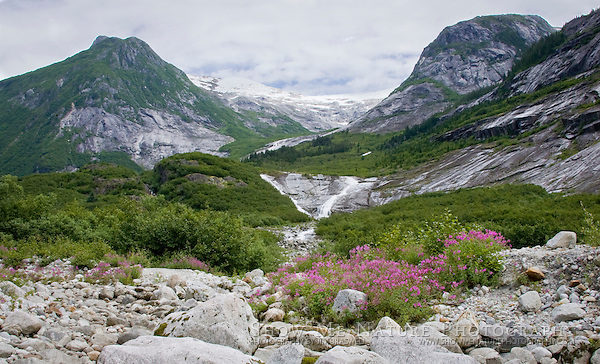 I was really looking forward to visiting this place again, during my upcoming photo workshop in the Inside Passage. But travel to Shakes Lake and Shakes Glacier is not possible this year, due to the large amount of glacial ice blocking the route (probably due to global warming?). But we have substituted a trip to LeConte Glacier on our workshop, another place I have previously visited. LeConte is a much larger glacier, with a lot of calving activity. And the numerous icebergs are home to hundreds of harbor seals (Phoca vitulina). And with our current temperatures at home (110F yesterday!), the cool temperatures of the glacial areas is very appealing right now!