While going through some old slides the other day, I ran across this image of a baby Northern Cardinal (Cardinalis cardinalis) that was taken in my front yard a few years ago. Not sure exactly when it was taken, but I’ve been shooting digitally since 2004, so it was before then! I scanned the slide (I have a rather cheap scanner, so the quality is not the greatest) and thought this would be a fun slide for a Friday post. So, here it is: 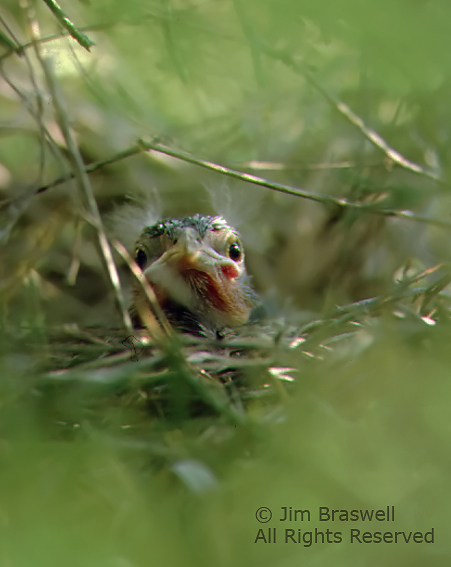 As you can see, “Junior” still has his down coating, which gives him an appearance of having “a bad hair day”. In fact, every time I look at this shot, the image of Albert Einstein comes to mind! This photo was taken using Fuji Velvia (ISO 50) film, a Canon EOS-1n film camera, and a 500mm f/4 EF lens. I possibly even had a 1.4x teleconvertor attached (that’s the nice thing about digital photography, you can always look at the accompanying file data and determine exactly what was used to make the image!).

I found this little guy in the nest while I was mowing. As I mowed around a very large Eastern red cedar, I observed both a male and female Cardinal would alternately fly from the tree whenever the mower got close. After a few rounds of this game, I parked the tractor and walked over to the tree. As I carefully moved some branches to the side, I saw a neat little nest that was a couple of feet from the tree’s perimeter. And inside the nest was “Junior”. Being careful not to scare the youngster, I let the branches fall back into place and continued my mowing.

Later in the day, after the mowing was done, I decided I wanted to try photographing Junior in his nest. But I didn’t want to frighten Junior. So I grabbed a portable blind I sometimes use and headed out to the cedar tree. Once there, I carefully positioned the blind so that I would have a clear shot of Junior, being careful not to get the blind too close. Then I headed back to the house, leaving the blind in place for Junior and his parents to become familiar with. On the following day, I headed out to the blind with my camera, tripod, and blind stool. After setting up the tripod and camera, I began photographing Junior as he sat in the nest, looking about (I think he could hear the camera shutter as I photographed him). After about 15 minutes, I quietly exited the blind with my camera gear. And later in the day, I removed the blind.

Since that time, the nest no longer resides in that tree; it most likely either fell down during high winds or was possibly removed by a predator. In any event, I will always remember my 15 minutes babysitting with Junior!

By the way, no birds were harmed during the photographing of this cute little bird :o)