I hope you had a chance to view the recent Geminids meteor shower (being a Gemini, I was particularly interested in photographing this popular meteor shower), which was outstanding where I live. It was a very long Wednesday for me, but I got to watch and photograph the very best meteor shower I’ve ever seen!! With the peak of the Geminids predicted for the very early morning hours of December 14, I set up my camera in a nearby farm field at about 10:00pm on Wednesday, December 13. Even then, meteors could be found flying all around me, and at a pretty constant rate. But since the real “shower peak” was predicted to be in the early morning hours, I set up to first do some star trails over one of my favorite nearby landscapes, a tall silo standing at the edge of the field. As the crow flies, this field is only about 1/2 mile from my rural Missouri home. Here is my favorite star trails image I captured on Wednesday night: 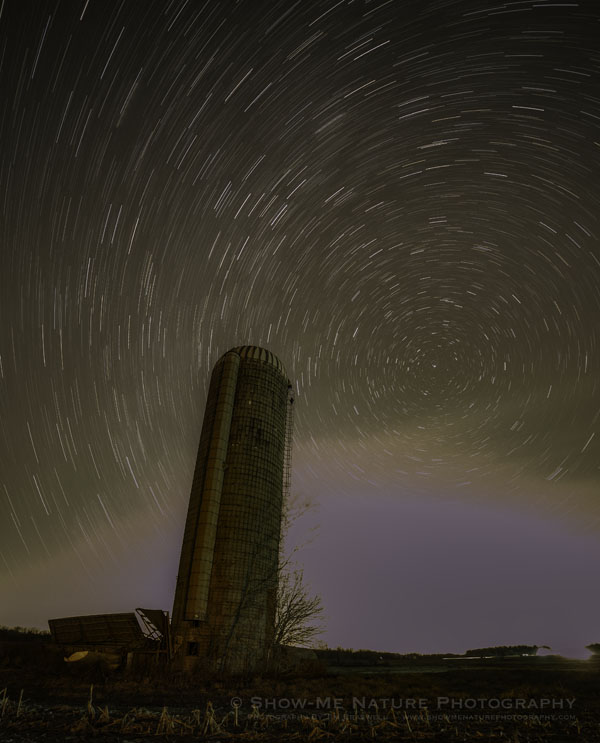 In the lower sky, some clouds were commonly found during most of the evening. But they didn’t really create a huge problem until about 2:30am, when the approaching cold front began moving southward, towards me. There are also a couple of rural farm homes, hidden behind the silo, which added a bit of light pollution to the image. But still an interesting landscape.

I’m still reviewing/editing my meteor images, but hope to have some to share by early next week!