Beginning today, my posts will feature the results of removing one of my “Bucket List” wildlife encounters … photographing our endangered whooping cranes (aka “whoopers”) while wintering along the Texas’ Gulf Coast. And what a wonderful photo trip it was! (By the way, I have added some whooping crane statistics and species information at the bottom of this post, for those interested).

I spent three days in and around Aransas NWR, photographing the whoopers, along with other wildlife I ran across. For the first 2 days, I was with a small photographer’s group (five of us) on a small charter boat. The boat was built for photography, with a flat bottom and room on the main deck and a raised deck, allowing sufficient room to shoot from a tripod. When we came upon a group of whoopers, the boat’s captain would quietly run the front of the boat upon the shoreline, making the boat “rock-steady”, allowing the use of telephoto lenses on tripods.

Here are just a few of my first day’s many encounters with the endangered birds:

Just after sunrise (on a very heavily cloudy day), we pulled the boat to the shore where this pair of adult whooping cranes, the first we saw, was busy foraging in the refuge waters, along with a large group of ducks (Note the leftmost crane has a green band on his right leg and a GPS transmitter on his left leg): 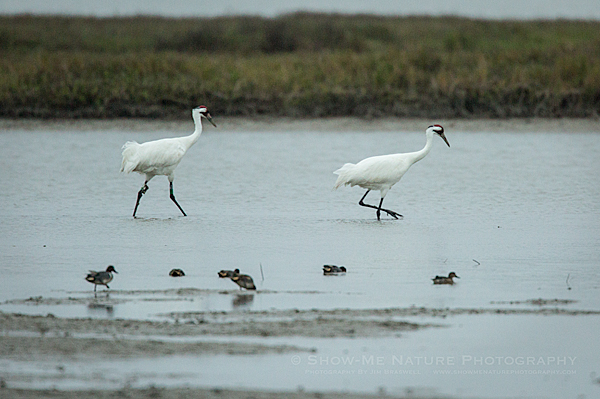 Within a few minutes, some of the ducks spooked, causing the cranes to spook and take to the air: 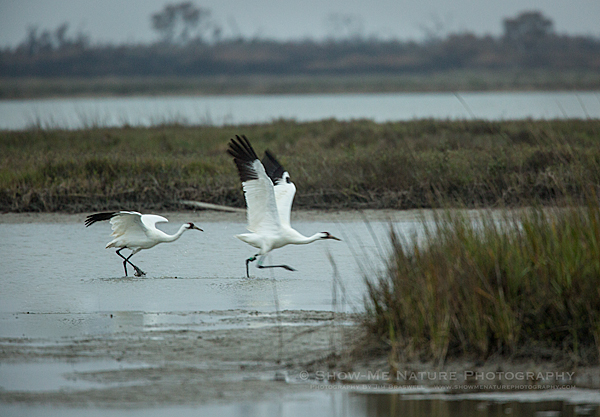 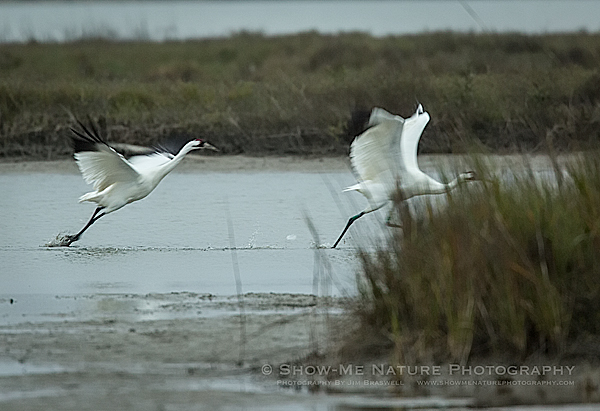 (In this next image, two Blue-winged Teal are in flight above the cranes): 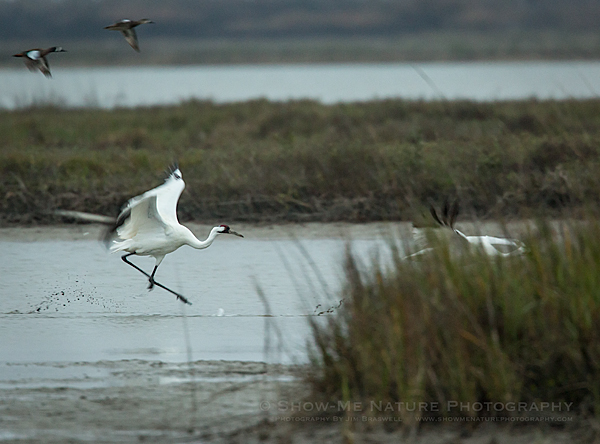 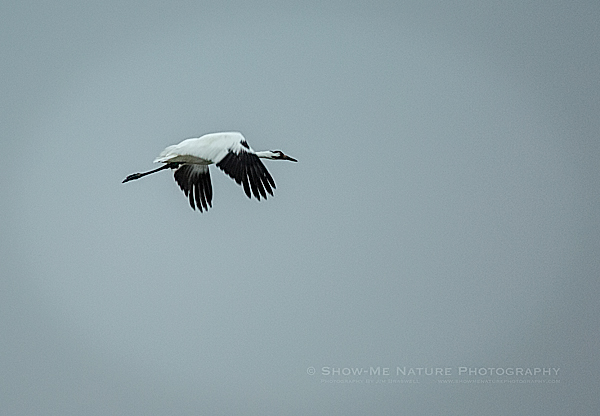 We were quite close to this pair, before the ducks spooked them. However, as the day progressed we got much closer to some of the cranes. I’ll feature some of those images in upcoming posts.

Now, a little info on the whoopers. First, the numbers of whooping cranes is reported to have dropped to an alarming 15 birds, placing them near extinction in 1941.  Today, there are 2 main wintering groups of whoopers. The Texas group is estimated to currently be at ~350 birds (because of the flock size growing, officials have stopped counting individual birds, but now estimate their numbers), and I have read that an estimated total of ~500 whoopers reside in North America. But even with the attention on protecting these magnificent birds, their numbers were seriously threatened by (and affected by) the Texas drought that occurred a couple of years ago. The main food source for the birds are blue crabs, which are rich in protein and fat; when the drought hit Texas, the number of crabs were severely reduced, causing a lack of major food source for the whoopers.

A second wintering group of whoopers reside in Florida. I am told that that flock (I don’t know their numbers, but suspect it to be at approximately 150 birds) consist of hand-raised birds that initially were hatched in their northern summer grounds and then trained to follow an ultralight that was flown to Florida to wintering grounds there.

The whooping cranes in Texas travel an amazing 2,500 miles each year down from Wood Buffalo National Park in Alberta, Canada, and are the descendants of the last wild flock (from the 1940’s).

In another post, I’ll include some more information on the whooping cranes, including their biology and behaviors.