Last Tuesday evening, I made an attempt to capture the Geminids meteor shower at a rural farm very close to my rural Missouri home. The decision to try photographing the Geminids was a last-minute decision, as the forecast had been for partly cloudy skies. But late in the afternoon, the skies were still clear and I decided to see how lucky I was! So I contacted farmer Harold, who owns the land and has so graciously allowed me to photograph the local, night skies on his farm (Thanks, Harold!). In fact, when I call him to let him know I want to try to capture something in the night sky, Harold always gives me the “thumbs up”, with a “Have Fun!”. So nice to have such wonderful people around me!

I was beginning to get “cold feet” as the evening progressed. The temperatures were in the upper teens and forecast to only drop further during the evening. But I wanted desperately to capture a meteor flying over the lone, tall silo on the farm!

I packed my camera equipment, flashlights, and a thermos of steaming hot chocolate into the truck and headed out about 10:30pm. As I left, I checked the thermometer … “17F”. It only took me 5 minutes to get to the shooting site. I set up two camera setups, one to capture the Geminid meteors, which originate from near the constellation Gemini (in the eastern sky), and one set to capture star trails around the silo, with Polaris (“North Star”, around which all other stars rotate over time in the night sky). After setting them up and getting them started, I have to admit that most of my evening was spent sitting in my truck and chugging hot chocolate!

Finally, at about 1:30am, I decided it was time to pack up and head back to my warm bed! When I picked up the camera gear, I was a bit shocked to find that everything was covered in an icy frost! Fortunately, I had used my “Dew Not” dew prevention heaters, so the lenses were not affected. Upon returning home, I saw the temperature had dropped to 13F. After finally finishing the editing of all the images I captured that night, here are a couple that I like.

In this first image, I blended together (in Photoshop) six images of star trails: 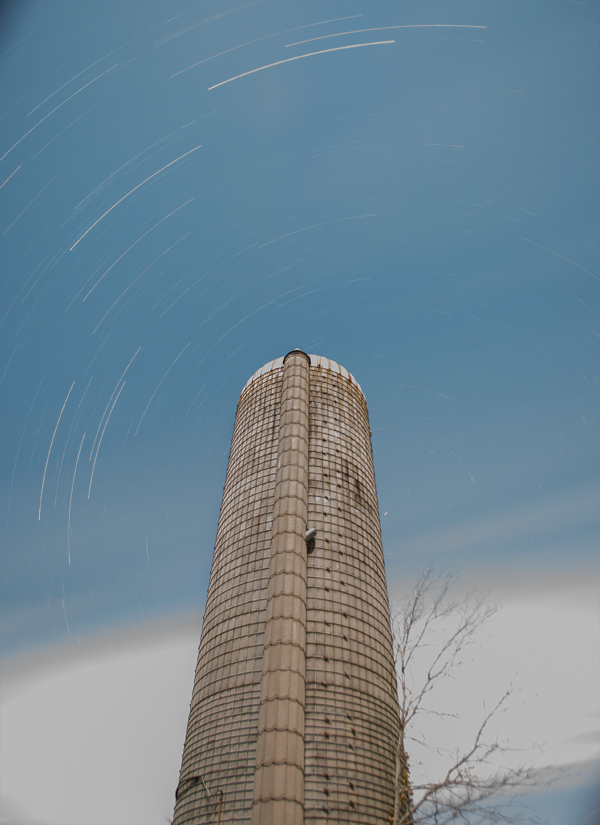 I almost hid Polaris behind the silo (you can see it, as a sharp star, to the right of the silo, about a quarter of the way down from the top).

From my second camera, set up to capture meteors, I was a bit surprised to find only one image that successfully captured a Geminid streaking across the sky and over the silo: 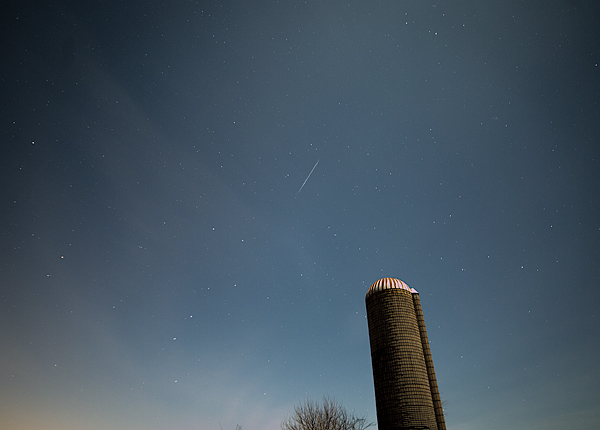 While sitting in the truck, I saw quite a few meteors during my 3-hour “work”. But due to the full moon, I was only able to capture one meteor. I only keep my fingers crossed that one of these meteor showers will occur during a “small moon”, or even a “new moon” (where the moon is totally dark).  :o)