Not long ago, while driving over a bridge on the way home, I noticed that our nearby creek appeared to be blocked up, causing the water level to be about 3-4 feet higher than normal. A few days later, I again crossed the bridge and saw a sure sign that beavers were at work in the area … several small saplings had been cut down and brought into the area, and were idly laying at the surface of the creek with the chewed ends pushed into the creek bottom.

This scenario is routinely seen in areas inhabited by beavers. As the midwest transitions into winter, our creeks, ponds and lakes will soon be frozen over and the beavers will have a hard time getting out of the water to get saplings for their food source. Consequently, they cut down saplings in the fall and carry them near their lodge … by sticking them into the bottom of the pond/creek/lake, they will be under the ice and available for snackies during the harsh winter months.

Adding to this situation is the fact that the beavers’ front incisors are continuously-growing and the beavers must, therefore, continuously chew on tree branches or trunks to keep their teeth from overgrowing. Unfortunately, this often leads to a devastating effect on the surrounding landscape. In this local situation, I confirmed with the landowner that beavers had dammed up the creek, using saplings they chewed down from his land. I also was told that they would be exterminated very soon. I really don’t like to hear that, but I do understand the destruction these little guys can cause.

So, I am currently working this area every morning that the weather allows me, to get some closeup images of these little guys at work. Here are a few I made during the first day of shooting. The first image shows the dam that was constructed across the creek. With our lack of rain in late summer/fall, the creek was really low at this area. But the creek caused the depth of the pool to be increased, allowing the beavers underwater access into their lodge: 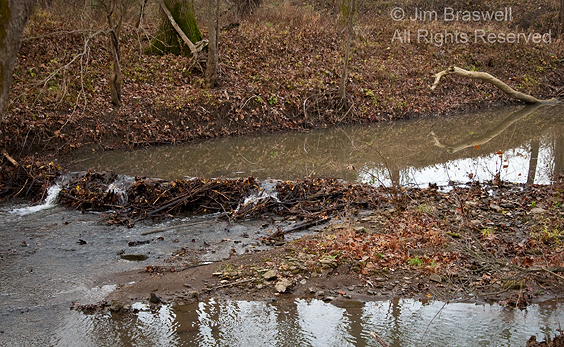 As I waited for a beaver to appear, I noticed a familiar “vee” shape gliding through the water. As it grew closer to me, I could see it was a juvenile beaver (note: all beaver images in this post were made before sunrise, using ISO 6400, resulting in shutter speeds of ~1/20 second (handheld), so the images are not as clear as I’d like, but the best I could do in the circumstances facing me): 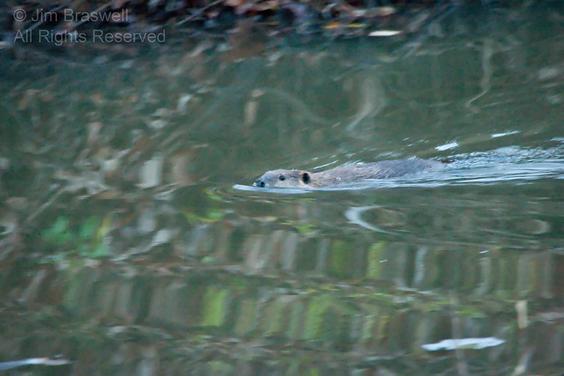 As he approached the dam, he climbed up and over it. Notice the break in the dam where he climbed over … there are 4 such breaks, but not sufficient enough to lose all the water.

Later, I’ll post some “Day 2” images of a larger beaver that I caught on my second outing to the creek.