As I mentioned in one of the first Baja posts, one of my main “targeted species” of the Baja trip was the whale sharks (Rhincodon typus) that often inhabit the Sea of Cortez, just outside the city of La Paz. Shortly after encountering the many Bottle-nose Dolphins while we were in the skiffs, we did come upon a single whale shark. Without our snorkeling equipment, we would only be able to view the shark from our skiff. But that wasn’t a real problem … the seas were rough enough that snorkeling would have been very difficult, as well as just spotting and viewing the shark.

As we approached the shark, I did manage to grab a few quick images as it swam about, feeding. Here are a few images I was able to capture. In this first image, the whale shark has his fin out of the water (you can see his body, underwater and to the left of the tail): 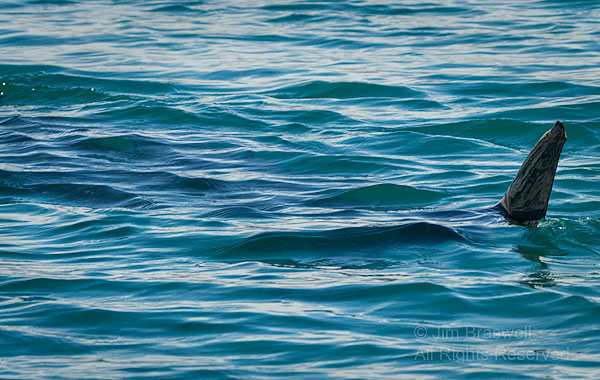 In this next image, I captured his dorsal fin, out of the water. Note the difference in shape between the tail and the dorsal fin: 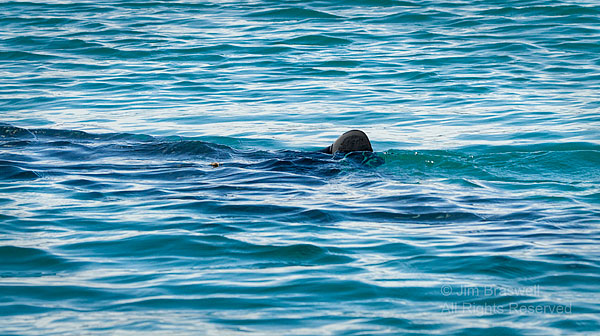 As our luck would have it, this would be the only whale shark we would see in the Sea of Cortez. The weather pattern there was horrible … extremely high winds. So windy that we had difficulty moving the boat around the Sea of Cortez. And if a whale shark would have been near us, we likely would not have seen it. However, on our return trip from Laguna San Ignacio to see the friendly gray whales (I’ll feature them in an upcoming post or two), we saw a large whale shark as it surface fed in the Bahia Concepcion (a lagoon along the Sea of Cortez). We were moving, and I only had my landscape lens with me (my telephoto gear was packed in the back of the van), so these are not great images. But you can see the expanse of these magnificent creatures, so I’m including them here: 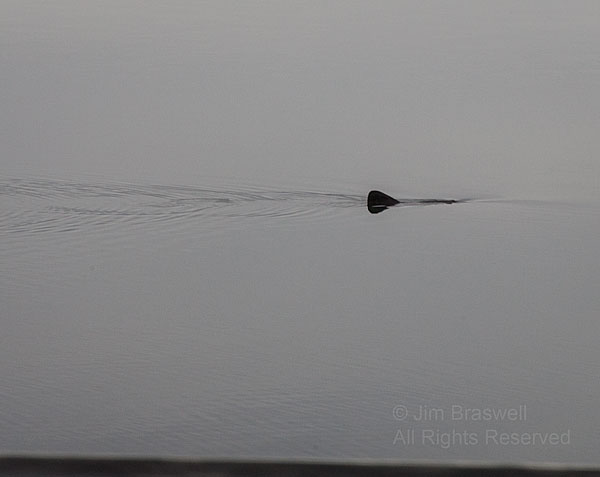 And in this final shot, you can see both the dorsal fin, and the tip of the tail out of the water. You can also see the wake this shark is leaving behind it (Gee, wish the water would have been this calm when we were cruising the Sea of Cortez!): 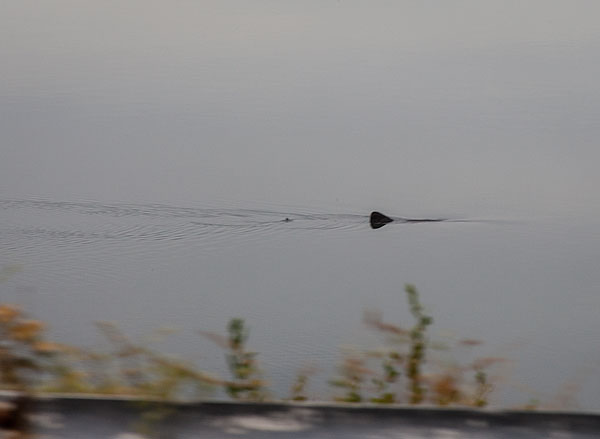 The whale shark is a slow-moving, filter feeding shark. Adults typically get 30-35 feet long. The whale shark’s mouth is ~5 feet wide, with 10 filter pads and between 300 and 350 rows of tiny teeth. It feeds on macro-algae, plankton, krill, Christmas Island red crab larvae and small nektonic life such as small squid or vertebrates. It also feeds on small fish and the clouds of eggs and sperm during mass spawning of fish shoals. The many rows of vestigial teeth play no role in feeding. Feeding occurs either by ram filtration, in which the animal opens its mouth and swims forward, pushing water and food into the mouth, or by active suction feeding, in which the animal opens and closes its mouth, sucking in volumes of water that are then expelled through the gills. In both cases, the filter pads serve to separate food from water. (This info was found in the Wikipedia information on whale sharks).

I was really planning on snorkeling with some whale sharks and grab some underwater photos and videos, using my underwater camera. But nature has a funny way of modifying plans! Besides, guess this means another venture to Baja is in my future!  :o)