A Scentsational Morning! (Re-post from 2010)

Yesterday morning’s kayak outing was a really fabulous time out. Although I didn’t get to photograph Belted Kingfishers fishing, there were plenty of other critters stirring about. And the weather was absolutely outstanding … temp started in mid 60’s, clear skies, low humidity … a great morning to be on the water!

The adventure began shortly after I pulled into the small parking lot where I launch the kayak. Since it was a while before sunrise would occur, I decided to sit in the truck until more light was on the pathway to the launch area; there are a lot of water snakes at this area and I certainly don’t want to step on one while carrying the kayak … my luck, I’d drop the kayak on my foot and break some toes! Anyway, while I was sitting in the truck, I noticed something behind me, scampering across the road. Since there was just enough light to see (we were in “Civil Twilight”, the ~30 mins before actual sunrise time), I thought “What the heck, if the images don’t come out, I just hit ‘Trash’!”. So I placed the ISO of my camera to 6400 and off I went.

I ran across the road and looked for my little buddy. At first, I didn’t see a thing … then, what’s that? 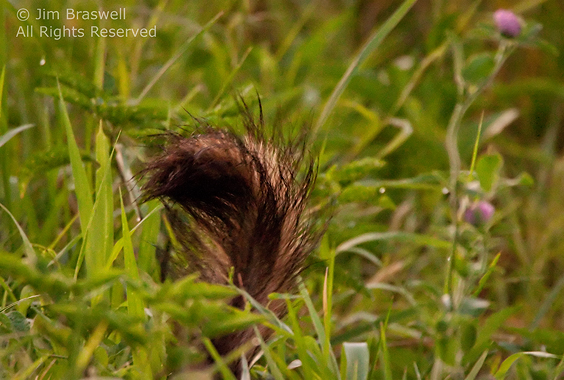 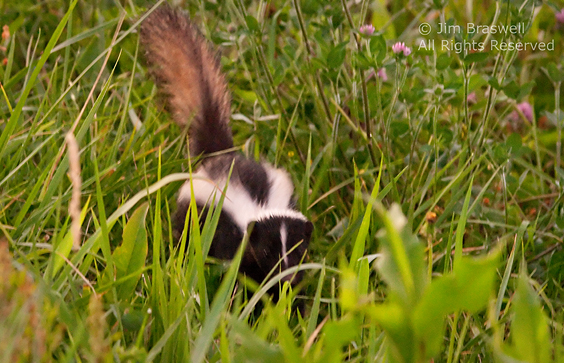 Oops! On the other hand, walk the other way, kitty! But “kitty” perked up and stared right at me: 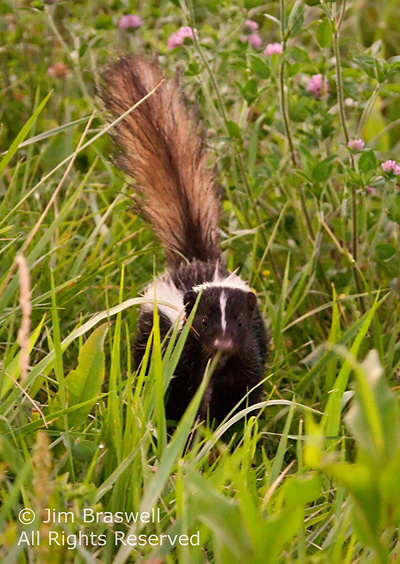 Well that was enough for me … time to grab the kayak and head for the water <skunks don’t swim, do they?>

I was pleasantly surprised that the images came out pretty well. After all, I was hand-holding the camera with a 100-400mm lens and a 1.4x teleconvertor … and it was ~20 minutes before sunrise! But the great sensors of today’s cameras are really a blessing for those early morning encounters!

Anyway, got the kayak out and launched, and began paddling to my favorite spot near a beaver lodge. I did see a Belted Kingfisher yesterday, but it did not stop to fish. No real matter, as many things were stirring in the beautiful morning air! But I’ll save that for another post. But yesterday truly was a Scentsational outing!