In lieu of another astrophotography post today, I’ve put together this tribute to John Glenn, who passed yesterday afternoon. John Glenn was a national hero, certainly a hero to me. I remember watching his historical orbit of earth in 1962, from my elementary school classroom. Seemed like fiction at the time, but in the decades to follow, advancements in space travel continued to hold my interest. So much so, that when it was announced that Astronaut Glenn would travel on the Discovery space shuttle in 1998 (designated as mission STS-95), I made plans to travel to the Kennedy Space Center to watch the launch in person. Doing my diligent research, I learned of what I needed to do to get a pass to watch from the Kennedy Space Center’s Causeway, and proceeded to do my “homework”. I was later elated to receive a notice from NASA that I had been accepted to receive a pass for witnessing the launch from the Causeway! As launch neared, I received my authorization, Permit #6617, from NASA.

Arriving in Titusville, Florida a couple of days before the launch, my wife and I took a daylong tour of the Kennedy Space Center. We had a wonderful time viewing all the exhibits and learning about space travel.

On launch day, I packed my photo gear into our rental car and off we went. Traffic everywhere! People everywhere! But such an exhilarating rush! I remember getting to the Causeway site, grabbing my gear and running to grab a front row spot for the launch. Even though it would be several hours before launch, it was a wonderful day for me! As launch neared, and the countdown was broadcast over a loud speaker, I could feel “goosebumps” up and down my arms. With just a few minutes before launch, the launch countdown was halted … a small plane had wandered into the restricted airspace and NASA helicopters and planes were rushed in to re-direct it away. Fortunately, the plane was “coaxed” out of the airspace and the countdown soon resumed.

As the launch neared, the protective covering over the nose of the shuttle was retracted (sorry, can’t remember what it was called, but I understand it was to “vent” gases from the shuttle) and with only seconds to go, the shuttles 3 engines were started, with liftoff quickly following. As the shuttle began to rise from the launchpad, it was quickly enveloped by “tons of steam” (to keep the concrete from cracking, they flood the pad with gallons and gallons of water; when the engines start, the water is instantaneously turned into steam). Then, out of the cloud arose the shuttle. The top of the shuttle faced us, but only for a brief time … as the shuttle gained altitude, it began it’s trademarked “roll” as it established it’s course into our heavens.

I’ve often been asked what was the most memorable parts of the launch, to me. I have to say it was the sound of the launch. Since safety is the main issue with a launch, the crowds are kept at a long distance from the launch pad (I believe it was between 2 and 3 miles). With all the power it takes to send a spacecraft into space, one would expect a launch to be very loud. But it surprisingly was not so! At liftoff, there was virtually no noise, except for the crowds erupting in elation. Then, within a few seconds, the waters in front of us “danced about”, due to the tremendous vibrations caused by the launch, as well as feeling “thunder in the ground” below my feet. Then, a short time later you could begin to hear the sounds from the shuttles engines. But not a loud roar like one would expect. Instead, it was a “crackly” sound … somewhat like you would hear while sitting around a campfire, only a more constantly crackling.

Following the launch, I put together a poster-sized memory of the launch experience and it proudly hangs in my computer room. This morning, when I decided to post a tribute to John Glenn, I captured a few photographs of my launch experience. Here are a few images from my poster:

My cut-and-pasted together poster: 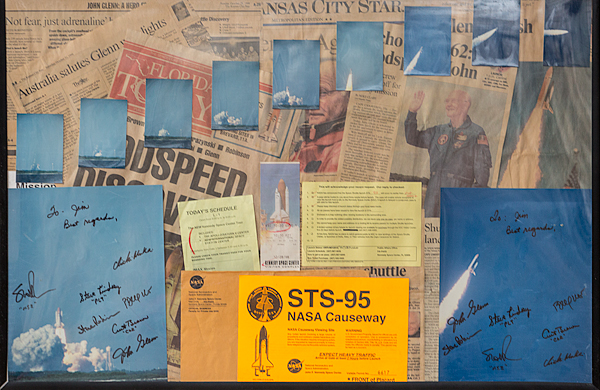 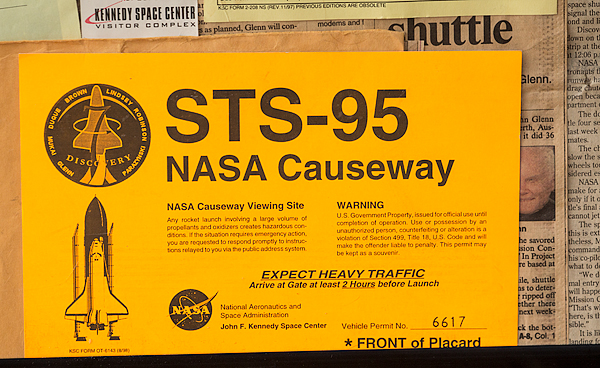 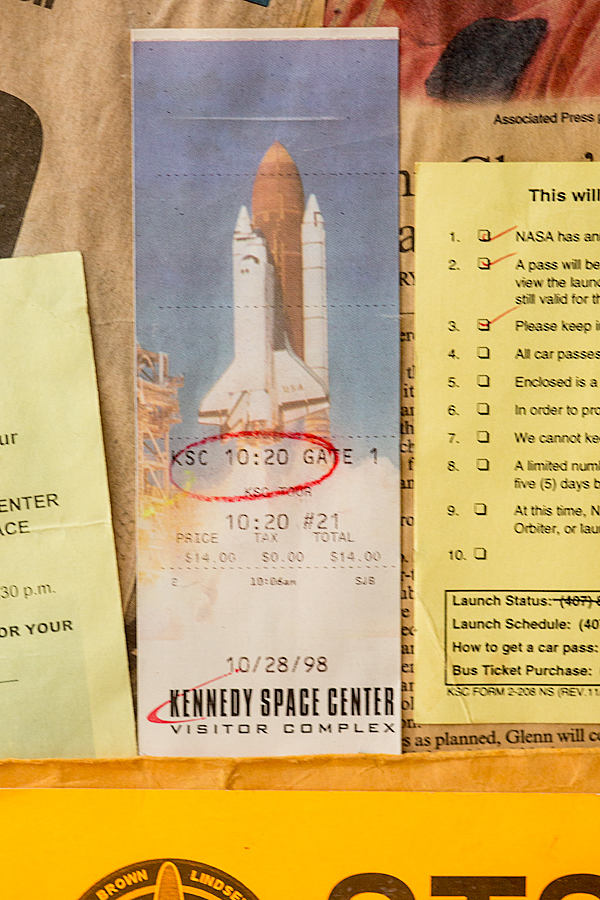 Following the launch, I printed a couple of images I had captured and forwarded them to the Astronaut’s office in Houston. It took about 3 months, but I received them back, signed by the astronauts. 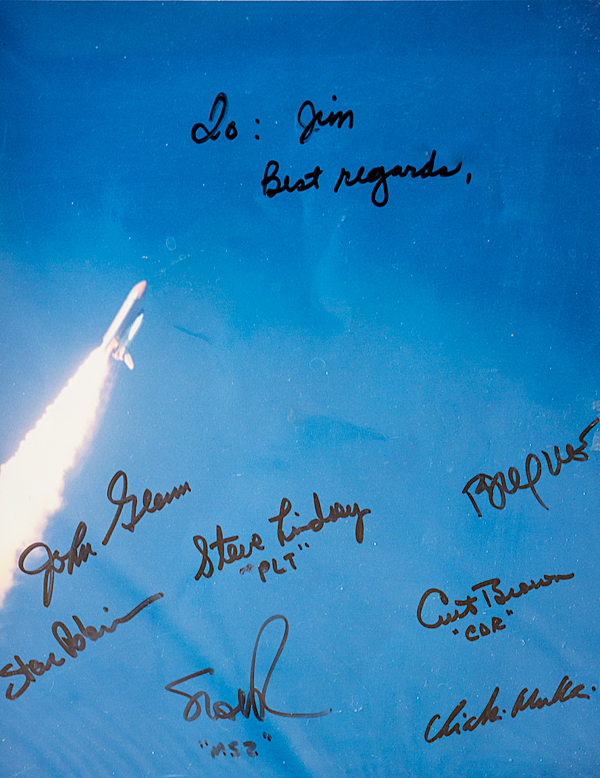 It was a sad day to hear of the passing of John Glenn. A true hero lost.